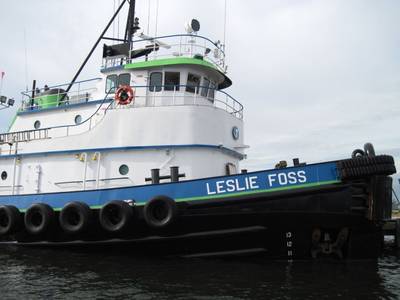 After 6 months of charter Marigny Tug LLC of St. Augustine, Florida has closed on the purchase of the U.S. flag tugboat “Leslie Foss”.

Prior to the sale, the twin-screw, sheer bow, ocean tug “Leslie Foss” (ex-Caribe Pioneer) had been on charter from Foss Maritime of Seattle, Washington. This is the second tug sale that Marcon International, Inc. of Coupeville, Washington has brokered to the Buyer. The new owners are in the process of renaming the tug “Simone”, after one of the principal’s oldest daughters.

Ships power is supplied by two 99kW main and one 75 kW emergency gensets, all powered by John Deere 6068s. With her 96,000 gallon fuel capacity, the tug has long-legs which helps when making tandem tows with her Markey TDSD-32 double drum tow winch, tow pins and stern roller.