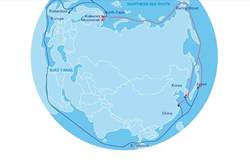 NSR passage for discharge in the Far East

The savings compared to a voyage through Suez were 18 days and 580 tons of bunker resulting in a significant cost benefit for the Charterer and reduced emissions. The M/T Mariann, sister vessel to Marilee, embarked mid September as the second vessel under Marinvest management, on her NSR passage for discharge in the Far East. "We are proud and glad to participate in the opening of a very interesting and promising new ICE Class route," says Lars Mossberg, CEO of Marinvest.

Marinvest is the world leading LR1 ice class shipping company today with six LR1 Ice Class 1A, DNV classed, delivered from the Brodosplit shipyard in Croatia. The vessels are winterized and extensively prepared for cold climate operations with experienced crews. The six sister vessels together have ice experience from trading in ice in China, Artic Canada and St Lawrence area, Baltic Sea, White Sea and Northern Sea Route. Five of the six vessels trade in the Straits Pool based in Singapore together with a sixth ice class ship newly purchased by Oldendorff Overseas Operations. Straits Tankers Pool, being the biggest LR1 pool in the world,  is the commercial home for these vessels. The pool consists of 33 LR1 vessels with two new buildings to come, including  six ice classed units.

Straits Tankers Pte, is 50/50 pct owned by MOL and Hafnia Management A/S, and is operating out of Singapore and  Denmark, handling the commercial management of the pool.  "The pool manager is proud to also be able to present this NSR solution to the market, emphasizing though, that both the season and the available vessels are limited," says Anders Engholm, CEO of Hafnia. Furthermore, four of the six vessels are equipped with the Marinvest Alternative Propulsion System (MAPS) which enhances the safety of the crew, vessel and cargo in case of a main engine failure. The MAPS can be connected within 15 minutes and takes its power from the hydraulic system enabling the vessel to speed up to 10 knots in calm water. The system is tested and employed on a regular basis to ensure the crew is properly drilled, should it be necessary to employ the system in an emergency situation. The system has been noticed by leading insurance companies as an added safety thus leading to reduced premiums.