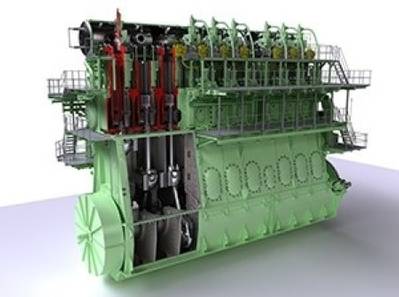 The engines are the largest dual-fuel engines ever ordered in terms of power output with each engine developing a massive 42,700 kW. The ME-GI engines and associated systems will be manufactured by MAN Diesel Turbo’s licensee, Hyundai, and will be able to use either HFO, MDO or LNG bunker fuel.

MAN Diesel & Turbo say that the 7S90ME-GI uses the Diesel cycle, rather than the Otto cycle to maintain high efficiency, with no need for any derating, adding that the engines by virtue of the diesel operating principle will have negligible methane slip and no need for restrictive load ramps or other knock-preventing measures.

The new container ships will be constructed by Aker Philadelphia Shipyard, the leading U.S. commercial shipyard, and are scheduled for delivery in the third and fourth quarters of 2018.   Matson states that the 850-foot long vessels will be the largest Jones Act containerships ever constructed and are designed to operate at speeds in excess of 23 knots. Importantly, the ships will also be able to navigate safely into some of Hawaii's smaller ports.

MAN Diesel & Turbo say that the  ME-GI engine represents the culmination of many years’ work. Depending on relative price and availability, as well as environmental considerations, the ME-GI engine gives shipowners and operators the option of using either HFO or gas – predominantly natural gas. An ME-LGI counterpart is being developed to use LPG and methanol.