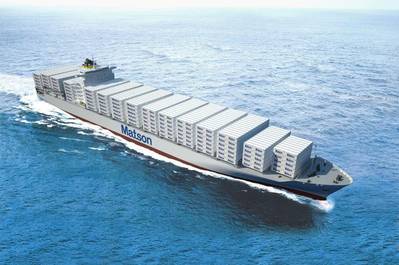 The dual fuel engines, each developing 42,700 kW, are reportedly the largest ever ordered in terms of power output. The ME-GI engines and pertaining systems will be manufactured by MAN Diesel Turbo’s licensee, Hyundai and will be able to use HFO, MDO or LNG as fuel. According to the engines’ manufacturer, the 7S90ME-GI uses the Diesel cycle to maintain high efficiency, with no need for any derating. The company also states that the engines by virtue of its diesel operating principle will have negligible methane slip and no need for restrictive load ramps or other knock-preventing measures.

APSI delivered four newbuild Jones Act containerships for Matson from 2003-2006. Expected for delivery in the third and fourth quarters of 2018, the newest orders will add to Matson’s current 18-vessel fleet of containerships, combination container and roll-on/roll-off ships and custom-designed barges, were ordered at a reported aggregate price of $418 million. The 850-foot long vessels will be the largest Jones Act containerships ever constructed and are designed to operate at speeds in excess of 23 knots, and will still be able to navigate some of Hawaii’s smaller ports.

Matt Cox, Matson’s president and CEO, said the Aloha Class containerships are built specifically for Hawaii’s freight demands: "The new ships are designed to accommodate the diversified mix of cargo needed to support the state's economy and will boost our capacity for moving 45-foot containers and refrigerated cargo. The ships will also carry construction materials more effectively. Most importantly, this considerable investment underscores Matson's long-term commitment to providing Hawaii with a strong, reliable lifeline to and from the U.S. Mainland."

The first of the two new ships will be named after the late Senator Daniel K. Inouye, who was a longstanding supporter of the U.S. maritime industry and its role in supporting Hawaii's economy.