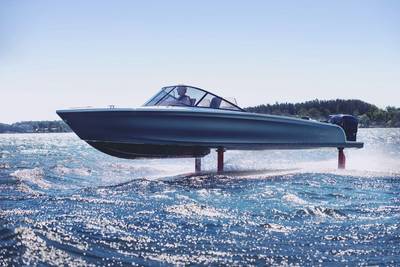 Built in Sweden, the Candela 7 is a 7.7m open motorboat that combines carbon fiber construction and hydrofoils to create a near silent 100% electric craft with a range of 50 nautical miles (at 25 knots) on a single charge.

Focus on weight reduction is the key to this game changing performance. With a wet weight of only 1300 kg, the Candela is around 45-50% lighter than a traditional glass fiber fossil fuel powered boat.

Sicomin joined the project at an early stage, working with Candela to supply high-performance epoxy laminating resins for the manufacture of the initial prototype vessels.  With the ramp up of series production, the company has also been able to support Candela’s targets to industrialize the production process, providing materials and process support that are then validated with extensive on the water testing.

By switching the epoxy system for the hull and deck to Sicomin’s SR1710 infusion product, Candela benefits from a cleaner and more consistent process technology while also producing laminates with extremely high mechanical properties and an impressive Tg of 100˚C after post cure.

SR1710 has also been shown to deliver excellent performance in hot and wet conditions, critical for Candela in such a highly loaded foiling craft.
Bonding of the Candela 7’s internal structures and final assembly of the finished craft has been designed around Sicomin’s flagship epoxy adhesive, Isobond SR7100TH.  Formulated for both thick and thin bond lines, SR7100TH comes with several different hardener speeds and provides a user-friendly bonding solution that is particularly resistant to micro-cracking in long term fatigue testing.

Now in series production, with 5 boats already delivered in Europe, Candela’s new boat can be seen and test driven at various locations across Europe over the next few months.