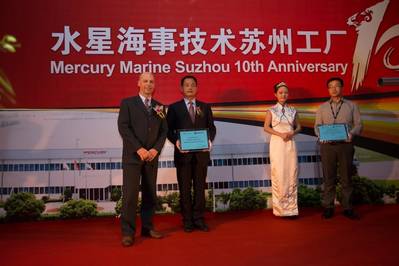 Mercury Marine's Suzhou, China plant recently received the Brunswick Corporation Chairman's Safety Award for excellence in safety and employee engagement. Mercury Marine Suzhou plant manager Eric Liu and safety officer Lawrence Liu received the award from Mercury Marine president John Pfeifer during the plant’s 10th anniversary celebration.
As part of the safety recognition, Mercury Marine Suzhou was awarded $10,000 for charity donation. The team decided that half of the donation would go to the Red Cross Society of China while the other half was donated to a school for underprivileged children living in JiangXi province.
Eight employees from Mercury Marine Suzhou embarked on a three-day donation trip to the school. The donation was used for the purchase of items including books, schoolbags, table tennis tables and electric fans for the children. Employees at plant 58 in Suzhou will also help the school to set up a mini library.
With the support and commitment from everyone in the company, the Suzhou plant also achieved a new record of three million working hours without lost time injury in 2014. Through June 2015, the record has reached 3.25 million days.
• Brunswick Corporation • John Pfeifer
Email