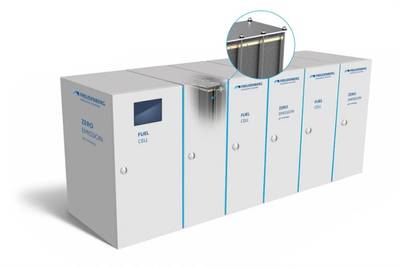 A methanol-operated fuel cell system from Freudenberg Sealing Technologies has received approval in principle (AIP) from classification society DNV GL, setting the course for further testing aboard the cruise ship AidaNova as soon as 2021.

Converting the approximately 100,000 commercial ships on the world’s oceans to CO2-neutral propulsion systems is one of the maritime industry's greatest challenges. Since a large part of this fleet is operated on the high seas, the range of any new propulsion systems must be able to cover vast distances. In merchant shipping, for example, container ships travel the route from Shanghai to Rotterdam without a stopover. Due to the heavy weight of batteries, electricity is not an option as an energy source. If used directly, “green” hydrogen obtained from solar and wind power is also suitable only to a limited extent.

The volumetric energy density of hydrogen – even when liquefied and stored at -253 degrees Centigrade – is seven times lower than that of conventional marine diesel. This would require huge fuel tanks, which in turn would not be practical. It’s thus a good option to chemically bind the regeneratively produced hydrogen. An ideal candidate for this is methanol, a simple alcohol that is liquid under normal conditions and has about three times the energy density of liquefied hydrogen. The technical methods for the production are tried and tested because methanol is already an important basic material in the chemical industry. If the carbon for the methanol production isn’t derived from fossil sources but separated from the air, for example, or if the methanol is generated from biomass, the fuel is completely climate-neutral.

Modular solutions for carbon neutral shipping
Methanol can be used in polymer electrolyte membrane (PEM) fuel cells that operate with an upstream reformer. Through steam reforming, the system produces hydrogen, which reacts with oxygen in the fuel cell to produce the electricity required for the propulsion as well as the on-board power supply. Freudenberg Sealing Technologies has developed such a fuel cell operated with methanol in a container design with a view to its implementation in shipping.

The fuel cell stack, reformer, control electronics and all components for the media supply are in a prefabricated container that makes on-board installation easy. The individual container can have a rated output of up to 500 kilowatts and can be scaled with additional units to achieve total outputs in the double-digit megawatt range. These performance data are essential in order to use ships safely. Due to the high degree of thermal and mechanical integration of the full system, the heat required for the reformer can be obtained directly from the waste heat of the fuel cells.

The fuel cell system with integrated reformer is part of a maritime portfolio that demonstrates Freudenberg Sealing Technologies’ longstanding fuel cell expertise to the shipping industry. For applications in which range isn’t an essential criterion and hydrogen infrastructure exists on site, Freudenberg can also provide fuel cell systems without reformers for pure hydrogen operation. The company additionally offers a solution for the maritime operation of fuel cells with liquefied natural gas (LNG), where the required reformer is also integrated into the container.

LNG can also be produced based on green hydrogen. Due to strict emission regulations, LNG-operated combustion engines are increasingly used in coastal areas worldwide, so that the corresponding tank infrastructure already exists in many ports and on ships.

Unique depth of value creation at the company
The safety concept for fuel cells with an integrated methanol reformer has now been certified by the classification society, DNV GL, which means Freudenberg Sealing Technologies achieved an important step in establishing on-board use of its shipping system.

Systems backed by the “Pa-X-ell 2” research project will be installed on the AidaNova cruise ship as soon as in 2021, with collaborative participation from partners Freudenberg, Lürssen, Meyer Werft, AIDA Cruises and DNV GL.

“Our solutions aren’t just suitable for cruise ships and yachts but also all kinds of cargo ships and ferries. More than 95 percent of the ships require a solution that will work on the high seas,” explains Michael Milch, who heads the supplier’s program management. “The configuration as a hybrid fuel cell-battery system makes it possible to equip ships in all performance classes with 100 percent climate-neutral propulsion. Freudenberg offers its customers these hybrid solutions from one source.”