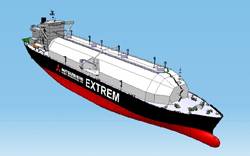 Mitsubishi Heavy Industries, Ltd. (MHI) has completed development of a new-generation liquefied natural gas (LNG) carrier. The vessel, dubbed "EXTREM," is part of the newly-developed "Sayaendo*2" Series, which features a peapod-shaped continuous cover for the Moss spherical tanks that is integrated with the ship's hull, in lieu of a conventional hemispherical cover. The new configuration enables greater structural efficiency and size and weight reductions, resulting not only in improvements in fuel consumption and operating economy but also in enhancements in terms of compatibility with LNG terminals and maintainability.

In conventional Moss-type LNG carriers, the upper half of the spherical storage tanks above the ship's deck is covered by a semispherical dome and the lower half under the deck is supported by a cylindrical skirt structure. By contrast, the EXTREM employs a continuous cover integrated with the ship's hull to house all storage tanks entirely, enabling the cover to reinforce the hull. In the conventional method, pipes, wires and catwalks atop the tanks were supported by complex structures. By covering the tanks with the integrated cover and making those supporting structures unnecessary, the new design improves maintainability.

The continuous cover over the tanks was designed to improve aerodynamics by substantially reducing wind pressure and reducing drag. Improved aerodynamics contributes to reduced fuel consumption during navigation. At the same time, the continuous cover minimizes exposure of support structures and equipments, and it also facilitates reinforcement of overall strength to be effective in resisting ice impact load, thus making the system suitable for LNG transportation in frigid or icy-water regions.

The new-generation LNG carrier measures 288 meters (m) in length overall (LOA), 49.0m in width, 26.0m in depth and 11.5m in draft. The ship has cargo tank total capacity of 155,000m3 using four Moss-type tanks. The ship is projected to respond to anticipated growth in demand for ships in the New Panamax*3 category. Compared with conventional Moss-type LNG carriers of the same size, the EXTREM has the capacity to transport 8,000m3 more LNG by employing stretched Moss tanks and its steel hull structure is about 5% lighter in weight. The depth of the ship has also been reduced by 1m, enabling better compatibility with major terminals in Japan and other countries in view of cargo manifold and gangway landing arrangement.