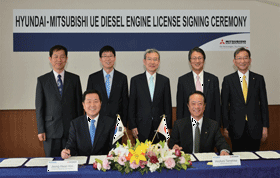 Through this licensing arrangement MHI seeks to further accelerate penetration of the Mitsubishi-UE engines in Korea, which has a near 35% share in the world's shipbuilding market, and other countries; it also aims to enhance its collaborative relationship with HHI, looking to boost the low-speed marine diesel engines' share in the global market.

Specifically the new agreement grants licensing privileges to HHI to manufacture, sell and service Mitsubishi-UE LSE and LSE-Eco series engines with cylinder bores of between 350 to 800 millimeters (mm). Earlier MHI licensed its UE engine technologies to HHI in 1984. The new agreement has evolved from that previous contract, including an expanded number of licensed engine models.

Mitsubishi-UE is one of three major brands in the global market for marine diesel engines, along with MAN and Wärtsilä. UE engines feature compact size, outstanding operating efficiency, and environmental advantages such as low fuel consumption and less cylinder lubrication oil required. They are available in a wide range of models to accommodate diverse power output needs.

MHI consider that HHI has the capacity to produce about 14 million horsepower of low-speed marine engines annually.