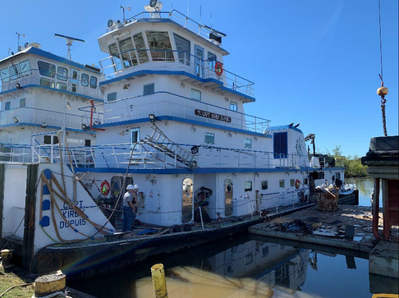 A missing retaining ring and mounting bracket on the port main diesel engine led to an engine-room fire on a towing vessel near Belleview, Ky., the National Transportation Safety Board (NTSB) said.

Florida Marine Transporters' (FMT) towing vessel Capt. Kirby Dupuis was pushing loaded dry cargo barges on the Ohio River when a fire broke out on its portside engine on November 9, 2021. The crewmembers fought the fire using portable extinguishers and attempted to activate the vessel’s fixed fire-extinguishing system. The fire was eventually extinguished by local firefighters. No pollution or injuries to the six-person crew were reported. The vessel sustained an estimated $1.8 million in damages.

Following the fire, NTSB investigators reviewed the vessel’s video system which showed lube oil spraying inboard from the port main engine. About 10 seconds later, a flame was seen at the top of the forward part of the engine. An inspection of the engine found a broken O-ring and the retaining ring missing from where the tube connected to the lube oil filter housing. Additionally, supporting clips and mounting hardware for the lube oil tube were missing on the port main engine in the mid-section area, and the bolt that had held the supporting clips appeared to be sheared. It is not known how long the supporting clips and hardware had been missing from the engine. The last major work on the engine, a top end overhaul, was in May 2018.

The NTSB determined the probable cause of the engine room fire was a lube oil tube on the port main engine that vibrated out of a joint due to a missing retaining ring and mounting bracket. It sprayed pressurized oil that made contact with a hot exhaust surface and ignited. Contributing to the severity of the fire damage was the crew’s unfamiliarity with activation procedures for the fixed fire-extinguishing system, which resulted in an unsuccessful attempt to release the fire suppression fluid and extinguish the fire.

As the world’s largest cruise ship Wonder of the Seas, departed on her maiden voyage in the beginning of March 2022, she…