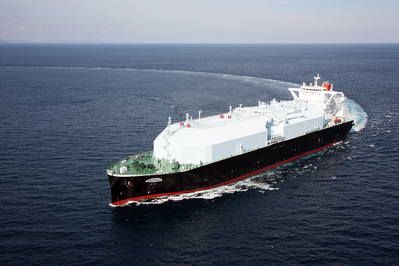 The ship, named "LNG JUNO," is the third "Sayaringo STaGE" type vessel, and is Mitsubishi Shipbuilding's newest carrier to feature significant improvements in both LNG carrying capacity and fuel performance through adoption of a more efficient hull structure and an innovative hybrid propulsion system.

The LNG JUNO will go into service transporting LNG for purposes such as the Freeport LNG Project in the U.S. state of Texas, in which Osaka Gas Co., Ltd. is participating.

The well-attended christening ceremony was held at the Koyagi Plant of MHI's Nagasaki Shipyard & Machinery Works, with a representative of the ship's owner among those present. Takehiro Honjo, Representative Director and President of Osaka Gas, proclaimed the formal christening. Mrs. Honjo performed the ceremonial rope cutting.

The LNG JUNO features LOA (length overall) of 297.5m, width of 48.94m, depth of 27.0m, and draft of 11.5m. Deadweight capacity is approximately 80,300 tons—the largest within the Sayaringo series—and the total holding capacity of the tanks is 180,000m³. Launching took place on March 17, 2018. Construction was performed by Mitsubishi Heavy Industries Marine Structure Co., Ltd. a Nagasaki-based MHI Group company. The new vessel's name borrows from Juno, the ancient Roman goddess of marriage who manifests an image of peace and happiness.

The Sayaringo STaGE is a successor to the "Sayaendo," a vessel highly acclaimed for its improved Moss-type spherical tanks and outstanding reliability. The adoption of the apple-shaped tanks and hybrid propulsion system functionality in the new Sayaringo STaGE has enabled a significant increase in LNG carrying capacity and overall fuel efficiency.

STaGE, an acronym deriving from "Steam Turbine and Gas Engines," is a hybrid propulsion system combining a steam turbine and engines that can be fired by gas. Efficient use of the engines' waste heat to drive the steam turbine results in substantial improvement in propulsion efficiency, enabling high-efficiency navigation throughout a full range of speeds.

A group of Japanese partner companies have signed onto a project initiated by Asahi Tanker Co., Ltd. to build the world's first zero-emission…