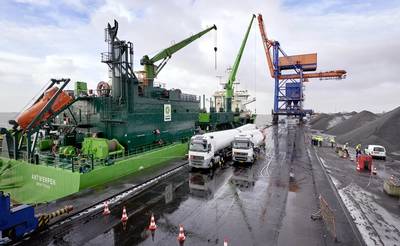 Nauticor has conducted the largest-ever LNG bunkering operation in Germany in the Elbehafen in Brunsbüttel.

As the maritime market moves rapidly toward alternative fuel in the face of strict sulphur guidelines set to take effect in 2020, LNG is emerging as a prefered alternative, and the means to fuel commercial boats and ships of every size is taking shape in many forms. In Germany, for example, Nauticor has conducted the largest-ever LNG bunkering operation in Germany in the Elbehafen in Brunsbüttel, delivering to DEME Group’s Belgian-flagged hopper dredger Scheldt River 85 tons of LNG courtesy of truck-to-ship operations.

Nauticor used a bunkering technique where two LNG trucks are unloaded simultaneously, which has been successfully applied several times and allows for significant time saving.

Scheldt River is currently conducting maintenance dredging works for the water authority Wasserstraßen and Schifffahrtsamt Cuxhaven on the Elbe River between Cuxhaven and Wedel. Additional LNG bunker operations for the vessel in the Elbehafen Brunsbüttel are already planned. For the first time, long-standing demand for LNG as fuel for shipping is being generated along the Lower Elbe between Brunsbüttel and Hamburg.
• DEME Group • Elbe River • Germany
Email