MSHS to Sell Bergen Engines in the Americas 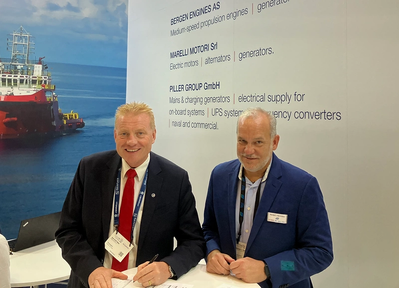 Jon Erik Røv, Managing Director of Bergen Engines group , together with Randall Nunmaker, Director of Sales & Marketing in MSHS at the maritime exhibition SMM in Hamburg on Tuesday, 6 September.(Photo: MSHS)

This is the first of several new partnership deals Bergen Engines is expected to sign under its new ownership.

David Miller, Managing Director of Bergen Engines Inc. said, “The Bergen Engines group is confident this agreement will be an important step to ensure our customers a world-class service to our engines and gensets, wherever in the Americas they operate.”

MSHS has been an engine service provider since 1983 with extensive technical capabilities to service the world’s leading engine brands. With the recent acquisition of Pacific Power Group, MSHS employs more than 500 dedicated spare parts and service maintenance team members across the Americas.

“MSHS is proud to partner with Bergen Engines,” said David A. Santamaria, CEO of MSHS, “We are excited to align with a world-class brand that shares our commitment and values.”

The agreement between Bergen Engines and MSHS was formally signed during the MMS trade fair at Hamburg Messe this week.