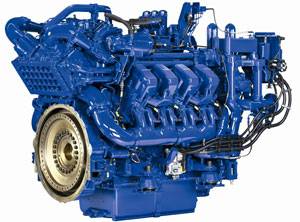 MTU Detroit Diesel will feature three of its most popular marine engines – the Series 4000, Series 2000 and Series 60 – at the International WorkBoat Show, booth #621, in New Orleans, December 1–3, 2010. As part of the WorkBoat Professional Series, a representative from MTU will be participating in a panel discussion about predictive and preventive maintenance. MTU will also be highlighting its control systems, genuine parts and service products at the show.

MTU will also be displaying its EPA Tier 2-certified Series 2000 engine as well as the Series 60 engine, which is also EPA Tier 2-certified and has long been a mainstay in the workboat market. The Series 2000 M61 is available in both 12V and 16V configurations and covers a range of 805 to 1,070 bhp (600–800 kW). MTU will also feature customer testimonial videos at the booth.

Sherman works out of MTU’s new Gulf Coast Sales and Operations Center in St. Rose, Louisiana, near New Orleans. This new office is the North American headquarters for MTU’s commercial marine business. It is dedicated to serving commercial marine operators on the Gulf Coast and Inland Rivers.