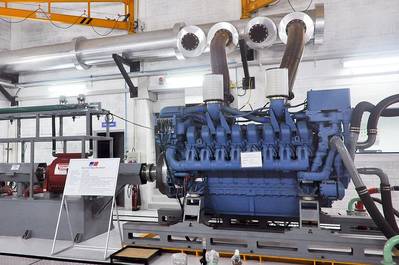 The Tognum Group company MTU India opened a new engine test cell facility at its MTU India Service Center in Tathawade, Pune (India). The test cell’s dynamometer system is capable of testing all MTU engines up to Series 4000 engines in the range from 300 to 4,300kW, as per MTU test protocol, and for all applications.

In February 2010, MTU India opened its new head office for sales and service operations in Pune. The addition of the new engine test cell facility to the MTU India Service Centre brings a new phase in MTU India’s ability to meet its Indian customers’ needs in the region.

Satish Phadke, Director and CEO of MTU India, stated at the opening ceremony, “With today’s inauguration of our new engine test cell facility, MTU India will be able to expand on its commitment to customers on service and better meet customer expectations for witnessing full load cycle test at the Service Center in India. Hence, this is an important milestone for our customer service capabilities in the region.”

Tony Davis, Vice President for Network Management and Global Distribution at MTU, inaugurated the engine test cell facility by explaining, “Establishing the new test cell at MTU India Service Center is in line with Tognum’s expansion plan in India. Since 2010, we have expanded our presence in the Indian market with continued investments in terms of facilities, tools and network. These investments will go a long way in meeting the expectations of our esteemed customers in India.”