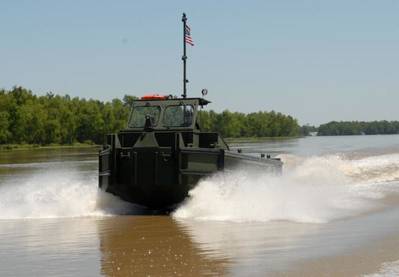 Bridge Erection Boats are primarily used to provide propulsion and maneuverable thrust to support temporary floating bridges often made necessary when existing bridge crossings have been destroyed in military conflict. They can also be used in a ferry configuration to transport equipment supplies and troops, and to tow other BEBs. The vessels are transportable by road, rail and air.

The BEB contract through the US Army Contracting Command's Tank and Automotive group calls for the replacement of the entire fleet of nearly 400 BEB's valued at over $250 million. Stringent requirements for the BEB included maximum stability, thrust, and reliability. Propulsion for the 23-foot boats will be supplied by dual 250-horsepower (hp) Cummins engines mated to TRAKTOR Jet 381 HH's.

"NAMJet propulsion played a key role in Birdon securing the contract, as their TRAKTOR Jet products provide significantly more thrust than other water jets while maintaining top end speed," said Jim Ducker, General Manager at NAMJet. "US defense contracts are among the most competitive in the world, and this win is a testament to NAMJet's propulsion expertise and ingenuity."

The manufacturers explain that with 2-3 times the impeller clearance of high-speed jets, TRAKTOR Jet systems operate at much lower RPM than their high-speed counterparts, which decreases fuel consumption and system wear to provide a significantly lower lifetime cost of ownership.

To better meet the needs of its burgeoning customer base, NAMJet is currently relocating its corporate and manufacturing headquarters.  The expansion brings an estimated 63 new jobs to Denver, where the firm will make an estimated capital investment of $4 million at its 50,000-square foot site.