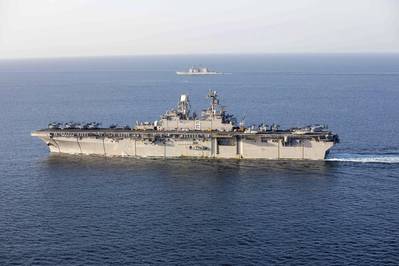 The U.S. Navy released on Tuesday a climate strategy that aims to make the force more resilient to changes like sea level rise and coastal erosion while moving faster to low-carbon fuels and hybrid engines for ships and planes.

The Climate Action 2030 plan, is part of the Biden administration's wider goal of decarbonizing the economy by 2050.

"By building a climate ready force, our sailors and Marines will be able to fight and win anywhere in the world in any condition," Meredith Berger, Assistant Secretary of the Navy for Energy, Installation, Environment told reporters.

The Navy's bases in Norfolk, Virginia, and San Diego, California, and the Marine Corps Recruit Depot Parris Island in South Carolina are among the Defense Department's facilities most vulnerable to rising seas, high temperatures, flooding and wildfires from climate change.

The plan offered little detail on how to broadly reduce emissions or switch to alternative fuels. But it spurs officials to report in 90 days to Secretary of the Navy Carlos Del Toro ways to harden infrastructure, adapt to climate, and reduce emissions and fuel consumption.

Berger pointed to the USS Makin Island, an amphibious assault ship deployed in 2009 that uses GE hybrid systems with electric and natural gas or diesel fired turbines to increase efficiency, as an example of ways to cut fuel dependency.

"Hybridization is something that we've seen some good results with, but there's also a lot of development to do in terms of technology," Berger said.

The plan comes at a time of rising energy costs for the military, the largest user of fuel in the United States. The Pentagon's comptroller told a congressional hearing last month that fuel will cost the armed services $3 billion more than planned this fiscal year.

As an example of efficiency, the plan mentioned the Marine Corps Logistics Base in Albany, Georgia, the first base in the Defense Department to generate more energy than it consumes, thanks to the harnessing of the fuel methane generated by a nearby landfill, and steam from an industrial plant, and solar and geothermal power.

The Navy has had mixed success with moving to alternative fuels. In 2009 the service announced a Great Green Fleet with a goal of getting half its fuel and power from fossil fuel alternatives such as advanced biofuels by 2020, but fell far short of the plan.

Meredith said the Navy is working with the energy industry in a "survey stage" to understand what kinds of alternative fuels are available but that the driving element is always making sure that Navy and Marine Corps "make mission."

She did not have an estimate of how much the plan would cost. The Navy's fiscal 2023 budget includes $718 million for fighting climate change.

Switching to alternative fuels can save money over time, Meredith said.