US Navy 'Green Fleet' Fills up with Italian-made Biofuel 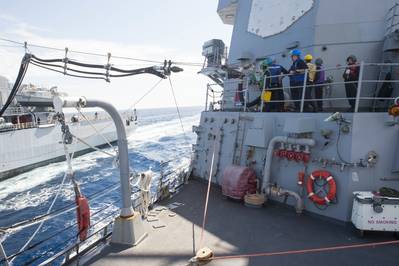 A U.S. warship took its first delivery of Italian-made biofuel on Thursday as part of the Navy's programme to use more alternative energy.
The USS Mason was refuelled alongside an Italian vessel, the Andrea Doria, in the seas off of Italy's southern coast with a mix produced by Italy's Eni that has 5.5 percent palm oil biofuel blended into marine fuel.
The two destroyers travelled at about 5 knots side by side with a supply ship, the Etna, between them pumping the fuel to both ships through large black tubes.
"It's a first today," U.S. Navy Secretary Ray Mabus told Reuters aboard the Mason. "But it's the new normal. It's what you're going to see - refuelling after refuelling after refuelling."
Mabus has championed the "Great Green Fleet" initiative since 2009, saying it will give a strategic advantage to the United States by reducing dependence on fluctuating oil prices and producers who may not have America's best interest in mind.
"Fuel can be used as a weapon," Mabus said. "All you have to do is look at what Russia did to Crimea, what Russia did to the Ukraine. Look at what Russia tried to do to Europe before the price of oil went down."
The cost of the fuel was $2.20 per gallon, which Mabus said was "very competitive" for Europe.
Many environmentalists say palm oil production damages the environment as it is often grown in plantations where rainforest has been cleared. Biofuels can also be made from other biomass or from by-products such as waste cooking oils.
The U.S. Navy now has 30 percent of its fleet, the world's biggest, running on alternative energy - which includes nuclear power - and aims to increase that to 50 percent by 2020, Mabus said.
Italy aims to have 50 percent of its fleet using alternative energy by 2020, Italy's Admiral Giuseppe De Giorgi, also aboard the USS Mason, told Reuters. About 10 percent of vessels are already running on alternative energy and Italy's submarines should start using biofuel this year, he said.
Italy had eight vessels present during the refuelling, including a submarine, and several ships from the U.S. Sixth Fleet were also there, including the nuclear-powered USS Dwight D. Eisenhower aircraft carrier.

FinCo Fuel Group announced on Monday it has acquired a majority stake in GoodNRG, holding company of renewable fuels firm…