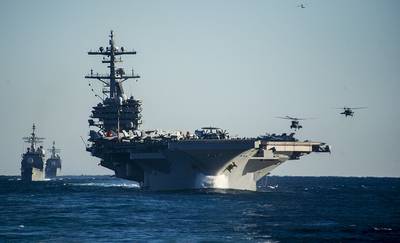 Adm. James F. Caldwell, Jr. relieved Adm. John M. Richardson, Director, Naval Reactors at a change-of-command ceremony at Naval Reactors Headquarters at the Washington Navy Yard on August 14.
Adm. Richardson, a submarine officer and a 1982 graduate of the U.S. Naval Academy, assumed command of the U.S. Naval Nuclear Propulsion Program in November of 2012. In his three-year tenure, Richardson led the command's work to provide the United States Navy with unmatched capability in endurance, responsiveness, and tactical flexibility supporting missions all over the world. During his command, Richardson focused on strategies to maintain the highest standards of integrity and excellence, a hallmark of the Naval Nuclear Propulsion Program. During the ceremony Richardson expressed gratitude to all that support the Nation's nuclear powered warships and spoke warmly of those he worked with at the command. He also spoke of his future responsibilities as Chief of Naval Operations, a position he was confirmed for on August 5 by the Senate.
"It has been a complete privilege to serve as Director of Naval Reactors. The Naval Nuclear Propulsion Program performs a unique and vital function for the Nation," said Richardson speaking to an audience of mostly Naval Reactors employees. "I will treasure my time as your leader, and am confident you will be a source of stability and excellence for the Nation for years to come."
During his 33 years of naval service, Richardson has served in a variety of sea and shore billets including Commander, Submarine Forces, Commander, Submarine Group Eight, and Commanding Officer of USS Honolulu (SSN 718).
Adm. Caldwell, a submariner and 1981 graduate of the U.S. Naval Academy, becomes the seventh Director, Naval Reactors. He has served in a variety of command positions afloat and ashore, including most recently as Director, Navy Staff. Prior to that, he served as Naval Inspector General, Commander, Submarine Force Pacific Fleet, and Commanding Officer of USS Jacksonville (SSN 699). Caldwell spoke of the storied history of the Naval Nuclear Propulsion Program.
"The Naval Nuclear Propulsion Program has provided safe and militarily effective nuclear propulsion plants to the U.S. Navy for over 60 years. I look forward to continuing the legacy of Admiral Rickover and the many others who have worked in this building," said Caldwell.
The Naval Nuclear Propulsion Program is a joint Department of Energy and Department of Navy organization responsible for all aspects of the Navy's nuclear propulsion, including research, design, construction, testing, operation, maintenance and ultimate disposition of naval nuclear propulsion plants. The program's responsibility includes all related facilities, radiological controls, environmental safety and health matters, as well as the selection, training, and assignment of personnel. Naval Reactors maintains an outstanding record of over 156 million miles safely steamed on nuclear power. The program currently operates 96 reactors and has accumulated of 6700 reactor-years of operation.
• Department of Energy • Senate • U.S. Naval Academy
Email