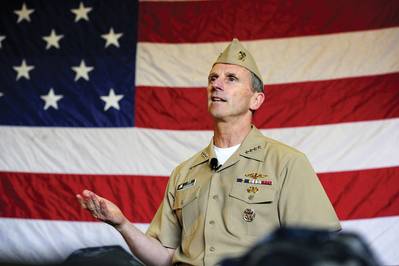 At the 200th anniversary of the War of 1812, and with a new Chief of Operations at the helm, the U.S. Navy continues to provide credible combat power with persistent presence around the world.  Chief of Naval Operations Adm. Jonathan Greenert has set forth his “Sailing Directions” and “Navigation Plan” for the Navy, which sets forth priorities and informs the budget and acquisition process.  Meanwhile, the demand signal for the capabilities provided by the Navy and Marine Corps remains strong, and shows no signs of abating.
“Today our Navy is the world's preeminent maritime force,” said Greenert.  “On any given day we have about 50,000 sailors and 145 ships underway, with about 100 of those ships deployed overseas.”
Our global fleet operates forward from U.S. bases and partner nation places around the world to deter aggression, respond to crises and, when needed and when called upon, to win our nation's wars,” Greenert said.
The global reach and flexibility that are hallmarks of a forward deployed Navy have done everything from launch missiles into Libya, to providing humanitarian assistance and disaster relief in Japan after the quake and tsunami, to protecting merchant ships from pirate attacks, to shielding our nation and our friends from ballistic missile attacks.  Yet the Navy finds itself being used in untraditional roles.  The U.S. naval forces at sea in the Central Command area of operations (AOA) are joined by another 10,000 Sailors on the ground, who are mostly serving in support roles in Afghanistan.
The Navy continues to build and maintain partnerships.  For example, USS Blue Ridge (LCC 19), USS Chafee (DDG 90) and USNS Safeguard (T-ARS 50) recently conducted exchange activities with the Vietnamese People’s navy in Da Nang, Vietnam; while USS Simpson (FFG 56) and 10 vessels from 12 West African and European nations successfully completed the 2nd annual Exercise Saharan Express 2012, a regional maritime exercise focused on improving the communications and interoperability of West African countries.
The shipbuilding program continues on course, but even as new ships join the fleet, older ships are being retired and the size of the fleet is not growing, and is not likely to reach the stated goal of 313 ships any time soon.  There are currently 288 ships counted—up from 274 in March of 2007—but that number will still be 288 five years from now.
However, Secretary of the Navy Ray Mabus told the Senate Armed Services Committee hearing on the Proposed Fiscal 2013 Defense Authorization, the “fleet of 2017 will include more more-capable ships equipped with state-of-the- art technology and manned as always by highly skilled people.”
Greenert has communicated his priorities through his “Sailing Directions” and “Navigation Plan.”
“Sailing Directions assist mariners in planning a long voyage by describing the destination, providing guidance on which routes to take, and identifying the conditions, cautions, and aids to navigation along the way,” the XX 2012 publication states.  “CNO’s Sailing Directions likewise provide a vision, tenets, and principles to guide our Navy as we chart a course to remain ready to meet current challenges, build a relevant and capable future force, and enable and support our Sailors, civilians, and their families.”
From the September 2011 Sailing Directions comes the April 2012 “Navigation Plan,” which draws from Sailing Directions to describe how Navy’s budget submission for Fiscal Year (FY) 2013-2017 pursues the vision of the CNO’s Sailing Directions.  “It highlights our investments that support the missions outlined in the new defense strategic guidance, Sustaining U.S. Leadership: Priorities for 21st Century Defense, viewed through the lens of my three tenets:  Warfighting First, Operate Forward, and Be Ready. The Navigation Plan defines the course and speed we will follow to organize, train, and equip our Navy over the next several years. To help identify our long-term destination, we are conducting assessments of the number and type of ships and aircraft required to implement the defense strategic guidance,” the plan states.
Greenert said the plan acknowledges “a dynamic security environment and fiscal challenges,”
“These factors may cause our intended plans to change or cause us to experience some ‘set and drift’ to our course,” he said.  “To ensure we stay on track, I will depend on feedback from the fleet to take a fix each year or when conditions require. I will use each fix to evaluate our track and, as needed, issue updates to the Navigation Plan.”

WARFIGHTING FIRST
“Our warfighting investments directly support the missions outlined in the new defense strategic guidance,” Greenert says.
The Navy’s FY 2013 – 2017 budget submission seeks to maintain the Carrier Strike Group (CSG) with its embarked air wing and the Amphibious Ready Group (ARG) with its embarked Marine Expeditionary Unit (MEU) as the main instruments to deter and defeat aggression and project power. That Navy will sustain 11 carriers and 10 air wings, one each in Japan; and 10 ARGs, including one in Japan.
To improve the Navy’s near-term mine warfare capability, the Navy will move ahead with the Quickstrike mine; the Seafox Mine Neutralization System; upgraded MCM-1 class ship sonar, hull, and engineering upgrades; and Unmanned Underwater Vehicles (UUV) for shallow and bottom mine detection.
The service will continue to keep the aging patrol coastal (PC) ships combat relevant against fast attack craft with enhanced gun and surface-to-surface missile systems, as well as for the new Littoral Combat Ship (LCS), as well as laser-guided rockets for helicopters and Unmanned Aerial Vehicles (UAV).
The service will continue its plan to acquire new but proven warships and aircraft, including the Arleigh Burke-class destroyer, San Antonio-class amphibious ship, Virginia-class submarine, MH-60 R/S helicopter, F/A-18 Super Hornet, E/A-18 Growler, and E-2D Hawkeye.
New platforms currently under development and construction will move to the Fleet, including LCS, the Gerald Ford-class aircraft carrier, America-class amphibious assault ship, Zumwalt-class guided missile destroyer, P-8A Poseidon maritime patrol aircraft, Joint Strike Fighter, and Broad Area Maritime Surveillance (BAMS) UAV.
The Navy awarded a $2.38 billion contract to Huntington Ingalls on May 31 to build LHA 7—the next USS Tripoli—at Pascagoula.
Nevertheless, the navy has decided to retiring seven Aegis cruisers instead of modernizing them, and is delaying the start of the SSBN(X) Ohio replacement program or the by two years.
Greenert says the Navy will “Improve the reach of today’s platforms through new payloads of more capable weapons, sensors, and unmanned vehicles to include: SM-6 missile, submarine-launched conventional strike weapon, long range surface-to-surface weapon, Air and Missile Defense Radar, Firescout UAVs, and the Unmanned Carrier–Launched Air Surveillance and Strike vehicle.”
He also says the Navy will “maintain our warfighting edge and implement the Navy/Air Force Air-Sea Battle Concept through innovation in our CONOPS and tactics, and integration of the next generation of weapons, sensors, and unmanned vehicle payloads for our current ships and aircraft.”
The Navy will continue to dominate the undersea environment with a combination of Virginia-class submarines, Virginia-class Payload Modules, improved torpedoes such as the Mk-54 lightweight torpedo and P-8A High-Altitude ASW Weapon Capability, and Large Displacement UUV, Greenert says.  “We also strengthen our defense against submarine threats with additional periscope detection systems and new torpedo countermeasures.”
The Navy will fully exploit cyberspace and the electromagnetic spectrum as warfighting domains with upgrades to Ship’s Signal Exploitation Equipment and the SLQ-32 surface electronic warfare system, and continued development of the Next-Generation Jammer for airborne electronic warfare, he says.
But even with the most advanced technology, superiority still translates to people.
“Every day our Sailors around the globe demonstrate their commitment to our Maritime Strategy through vigilance, exercises with allied partners, and ability to respond whenever and wherever they are needed. Our Sailors truly are the backbone of our Navy, and we are committed to equipping them with the tools they need to maintain maritime superiority and execute our nation's tasking, both now and in the future,” said Vice Adm. William R. Burke, Deputy Chief of Naval Operations for Warfare Systems.

(As published in the June 2012 edition of Maritime Reporter & Engineering News - www.marinelink.com)