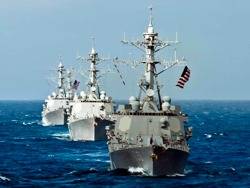 Many of the force reductions already have been announced, particularly new orders to decommission seven Aegis cruisers more than a decade before previously scheduled, a slowing in the rate of ballistic missile defense destroyer conversions and cancellation of plans to buy more than 10 small and cheap Joint High Speed Vessels. The amphibious fleet also is being reduced by about two ships.

Other changes already announced were shifts in the aircraft carrier and littoral combat ship construction rates, and a decision to push back new ballistic missile submarine construction by two years.

For the near term, the service projects an annual shipbuilding budget of $15.1 billion in 2012 constant dollars, a baseline used throughout the plan.

The rate of spending rises to $19.5 billion a year in the mid-term, due largely to the SSBN(X) Ohio Replacement Program, the effort to replace existing Trident ballistic missile submarines.

Average yearly expenditures fall to $15.9 billion per year for the far-term period.

Over the entire 30-year plan, the annual ship construction budget is projected at $16.8 billion per year, including Navy and National Defense Sealift Fund ships.