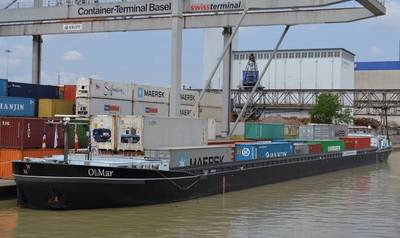 The OliMar at the Basel container port. (Photo courtesy of Cummins Marine)

The hours that a Cummins Marine engine can run between rebuilds will vary depending on operating conditions. However it is not unusual for operators to report 45,000 hours of operation. Such was the case for the owners of the Belgian-registered, 110x12-meter inland waterways vessel OliMar.
The dry cargo vessel was built in 1998 and fitted with a 16-cylinder 1,600 HP Cummins KTA50-M2 engine. Running primarily in daylight hours, the engine meter approached the 45,000-hour mark in early 2014. The owner knew that it was time to take action but had to consider two options. He could rebuild the engine and expect to get another run of similar hours. On the other hand he could replace the engine with a new electronically controlled Cumming QSK50-M. With high-pressure common rail fuel injection and a 15:1 compression ration the new engine would produce the same 1,600 HP at 1,800 RPM as the original mechanical engine. In addition to having a brand new engine, the vessel now meets the IMO Tier 2 and EU Stage 3a emission standards. This would also help maintain the value of the vessel and the owner’s investment.
As the OliMar continues to shuttle shipping containers between the Swiss port of Basel, Antwerp, Belgium and Rotterdam, Holland it can make up to 9.4 knots of speed and easily maintain an average of about seven knots. While making these speeds it will contribute to the reduction of green house emissions by keeping trucks off the highways while utilizing the latest in environmentally friendly engine power.
• Cummins • European Union • United Nations
Email