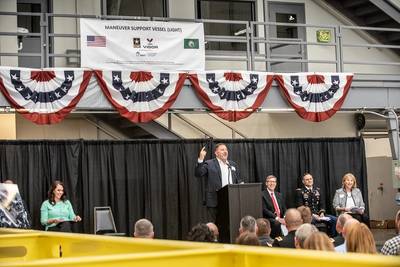 Dignitaries from the state of Washington joined Governor Jay Inslee, Washington State Ferries officials and Vigor employees at Vigor’s Seattle shipyard to celebrate the beginning of the greening of WSF’s fleet. Speakers included Governor Inslee, Roger Millar, Secretary of Transportation for Washington State Department of Transportation, and Vigor CEO Frank Foti. The ceremony concluded with a dedication of a sign marking the construction site of the Program.

Earlier in the year Washington’s legislature authorized a contract extension for Vigor to build up to five 144-car Olympic class, hybrid-electric ferries over the coming years for WSF, the largest ferry system in the United States.  Greening its fleet has been a major objective for WSF and is an important part of Washington’s overarching goal under Governor Inslee’s leadership to accelerate the State’s move to a clean energy future.

Vigor has built the last twelve ferries in the WSF fleet and has been actively engaged in the evolution of hybrid-electric solutions. In addition to other research, in June 2018 Vigor team members joined a delegation of maritime leaders on a Washington Maritime Blue visit to Norway to confer with experts on best practices and available technologies for low carbon ferry systems. Vigor and WSF will again visit Norway as part of a second Washington Maritime Blue delegation in September 2019.

The Olympic class hull form is one of the most efficient in the fleet with less drag through the water and a small wake for a positive environmental impact. The new hybrid vessels will utilize this hull form as well. They will be capable of 100% electric operation on most routes once the infrastructure needed for charging is installed. Over the life of the vessels, a 94% reduction in carbon emissions is anticipated along with the added benefit of significantly reduced operating costs for the ferry system.

The design and engineering phase to convert the existing Olympic Class design to hybrid-electric is currently underway.

Vigor expects to begin construction in late 2020, and delivery of the first ferry is anticipated late in 2022. Washington State Ferries’ Long Range Plan calls for all five ferries to be delivered by 2028, replacing aging vessels in the fleet.