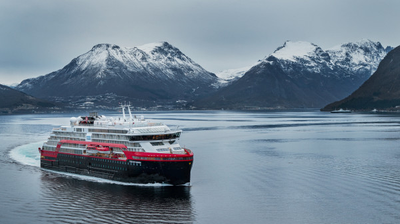 The Vessel is set for delivery by the end of 2019, well ahead of her April 1 inaugural voyage from Hamburg to the Norwegian coast.

Departing from London (March 7), Liverpool (March 12) and Portsmouth (March 17), the exclusive 5-night pre-inaugural voyages will take guests exploring hand-picked destinations in and around the British Isles. The hybrid powered ship will visit destinations such as Isles of Scilly, Fowey, Isle of Man and Dartmouth.

A 4-night voyage to the Norwegian capital of Oslo will take guests through the Kiel Canal and Aalborg in Denmark, from London’s Tower Bridge.

The University of Vermont (UVM) has ordered what is touted as the first hybrid research vessel, a project which brings together Derecktor Shipyards…

‘ROBOSHIP’ Takes to the Water off Japan

As maritime barrels toward an autonomous future, the ROBOSHIP Joint Value Creation Project is one that is making waves, literally and figuratively…