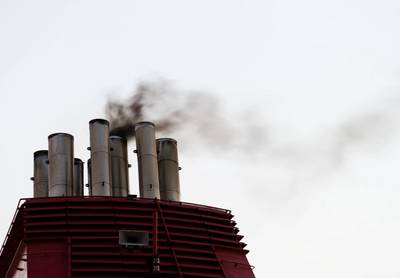 New rules coming into force from 2020 to curb pollution produced by the world's ships are worrying everyone from OPEC oil producers to bunker fuel sellers and shipping companies.

The regulations will slash emissions of sulfur, which is blamed for causing respiratory diseases and is a component of acid rain that damages vegetation and wildlife.

But the energy and shipping industries are ill-prepared, say analysts, with refiners likely to struggle to meet higher demand for cleaner fuel and few ships fitted with equipment to reduce sulfur emissions.

This raises the risk of a chaotic shift when the new rules are implemented, alongside more volatility in the oil market.

"The reality is that the industry has already passed the date beyond the smooth transition," Neil Atkinson, head of the oil industry and market division at the International Energy Agency (IEA), said in April.

What are the new Rules?
The rules, drawn up by the U.N. International Maritime Organization (IMO), will ban ships using fuel with a sulfur content higher than 0.5 percent, compared to 3.5 percent now, unless a vessel has equipment to clean up its sulfur emissions.

Any vessels failing to comply will face fines, could find their insurance stops being valid and might be declared "unseaworthy" which would bar them from sailing.

How will it affect the fuel oil market?
The global shipping fleet now consumes about 4 million barrels per day (bpd) of high sulfur fuel oil, but about 3 million bpd of that demand will "disappear overnight", according to the average market forecast calculated by Norway's SEB Bank.

Most demand is expected to shift to marine gasoil, a lower sulfur distillate fuel.

Morgan Stanley predicts this will generate at least 1.5 million bpd in extra demand for distillate in the next three years, pushing up total distillate demand growth for the period to 3.2 million bpd.

That, in turn, will drive up prices. Gasoil now trades at a premium of about $250 a tonne to fuel oil, but the forward curve forecasts this will balloon to $380 per tonne by early 2020.

Thomson Reuters Research estimates fuel accounts for about half a ship's daily operating cost. Based on average fuel consumption of 20 to 80 tonnes a day (MT/day), a ship using cleaner fuel faces extra daily expenses of about $6,000 to $20,000.

For example, a VLCC, one of the biggest oil tankers at sea, will pay 25 percent more for its fuel, or an extra $500,000 on top of normal bill of $2 million, for a typical 25-day voyage from the Middle East to Japan.

Will "scrubbers" help the shipping industry?
Shipowners can install kit called a "scrubber" that strips out sulfur emissions and allowing them to use the dirtier fuel oil. Some ships already have them. Global trading firm Trafigura has ordered scrubbers for its fleet of 32 ships.

But the equipment alone can cost $1 million to $6 million, according to manufacturer Wartsila, putting it out of reach of many operators.

By 2020, about 2,000 ships could have scrubbers, according to Wartsila, SEB Bank and industry analyst AlphaTanker.

But AlphaTankers' Andrew Wilson called this a "drop in the ocean", given there are about 90,000 vessels in the global fleet, of which about 60,000 ply international routes.

Based on the limited number of manufacturers and time constraints on facilities to install scrubbers, AlphaTanker estimates no more than 500 ships could be fitted each year. Wartsila puts the figure closer to 300.

So it would take more than 100 years to fit the global fleet.

Will everyone follow the rules?
Many vessels may try to dodge the new rules, unable to afford the cost of scrubbers and reluctant to pay the premium for cleaner fuel. But how much of the industry will cheat is open to debate, with estimates ranging from 10 to 40 percent.

The IMO says it will ban ships that do not have scrubbers from carrying any fuel oil, making it easier to catch cheaters.

Oil major BP expects 10 percent of ships could cheat, while consultancy Wood Mackenzie expects a figure of about 30 percent when the rules launch in 2020. Consultant Citac says industry polls indicate cheating could be in a range of 25 to 40 percent.

Some refiners have invested in cutting sulfur in their output, but fitting hydrocracker or coker unit so that a refinery produces more distillates with lower sulfur content while reducing fuel oil output can cost about $1 billion, analysts say. Small refineries, unable to afford the upgrade, may find they are churning out fuel oil without finding buyers.

A KBC consultancy survey showed 40 percent of Middle Eastern and European refineries are not prepared. European plants, which tend to be less complex than those in other regions, produce more fuel oil and may face the biggest challenge.

What will happen to the crude market?
The simplest way for refineries to produce fuel with less sulfur is to buy and process crude that contains less sulfur, a shift that could change demand for different oil grades and lead to greater oil market volatility.

"There will be a bidding war for sweet crude," said Stephen George, chief economist with KBC Advanced Technologies.

This could hike the price of sweeter crudes, including several grades used to make dated Brent, the benchmark for three quarters of the world's oil. Meanwhile, the cost of refining "sour" crudes with more sulfur, such as those from Venezuela, Mexico and Ecuador, "could be more than its value," he said.

Who will pay the price?
Energy firms and shippers may face a squeeze on margins. But, ultimately, extra costs are likely to fall on consumers of everything from household appliances to gasoline that are shipped around the world. Roughly 90 percent of world trade is by sea.

Wood Mackenzie estimates that global shipping fuel costs are likely to rise by a quarter, or $24 billion, in 2020. Others estimate extra costs for container shipping alone will be $35 billion to $40 billion.

In addition, a surge in distillate demand by shippers could push up prices of other products, such as jet fuel and diesel.