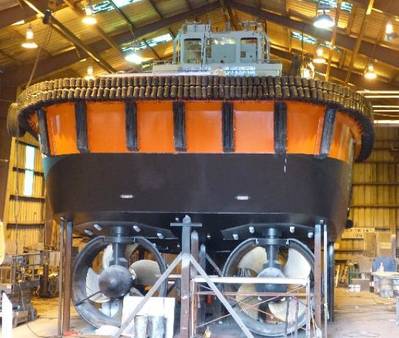 Not only is she a local design – she is locally built. The 5,000hp tug, designed by AG McIlwain, was launched from the North Vancouver shores at ABD Shipyards.

While it is not uncommon to find 5,000hp tugs in harbours across the globe, the Kootenay is remarkable in that she is less than 20 metres long. Other tugs of similar horsepower and performance are much larger and are not nearly as nimble.

"She was built as a more compact, agile tug to work in the fast currents and confined spaces of the Fraser River," said Managing Director Gordon Yahn.  "The last tug of this calibre that was built in B.C. was another AG McIlwain design launched back in 1999 – the Tiger Sun."

New vessels had previously been added to the overall Harbour Towage fleet in B.C. built overseas and imported from shipyards in Turkey, Germany, Holland, and the United States.