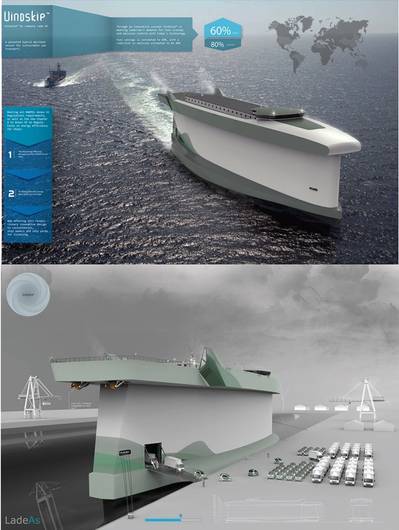 Norway is no stranger to maritime innovation, as the small Scandinavian country with a population just north of five million (according to most recent statistics from the World Bank) has a strong historical and current affinity towards anything to do with the sea. In addition, Norwegians are traditionally a population that considers environmental matters a top concern, so it’s little surprise to see continued commercial maritime innovation emanating from Norway.

Vindskip from Lade AS is a patented hybrid merchant vessel designed for sustainable sea transport. The designer claims potential fuel and emission savings of 60% and 80% respectively, courtesy of the highly unusual hull shape that is designed to essentially act as an air foil.

It’s designer claims, through information available on its website at http://www.ladeas.no that the design meets all MARPOL Annex VI regulation requirements, as well as the new chapter 4 to Annex VI on regulations pertaining to energy efficiency.