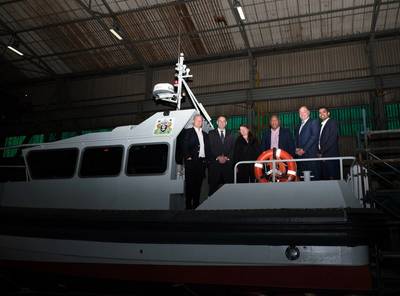 Veecraft Marine has manufactured more than 60  maritime platform solutions in various classes since its inception in 2002, totaling more than $130 million of contracts. Leveraging its specialization in the construction of 20 to 30 meter vessels, the company has secured an order book valued at more than $13.5 million. The  location of Veecraft’s new facility provides  ease of access to the ocean, helping to save cost and time in its logistical operations.

The 2,500 square-meter facilities  will be the home to 80 members of staff. Visitors at the grand opening were able to survey maritime vessel production processes and manufactured platforms in various stages of development, including 20m workboats for South Africa’s Special Forces, hydrographic motor boats for the South African Navy and a 24m coastal reconnaissance workboat for a West African customer, powered by Volvo IPS Pod Drives, notably the first commercial maritime vessel to be powered by these drives on the continent.