Nordic Lady: Keeping a Good Boat Up to Date 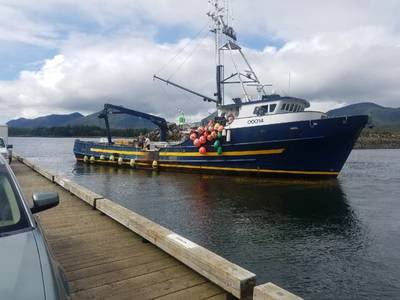 The Nordic Lady all back together and ready for sea trials. (Photo: Southeast Diesel)

When Trygve Westergard bought the 98- by 28-foot Judi B in the spring of 2016 he was entering a new chapter in a varied marine career. Growing up on a remote island off Ketchikan, Alaska as the third generation of Norwegian-Danish family, he had fishing in his blood and his environment. A stint at the California Maritime Academy earned him an unlimited masters license and a BS in marine transportation.

After a decade of running everything from ferries to off-shore boats and filling the gaps with fishing, Westergard decided it was time to come home. Given the price of quota the logical entry to the Alaskan fishery was with a tender to collect fish from other boats. This business would also allow his family on board for part of the year. In the Judi B, he found an excellent boat for tendering and still great potential for adding a quota fishery. Nichols Brothers in Washington State built her in 1975 to a Jensen-design inspired by a 98-foot Marco.

Since buying the boat, Westergard has added two RSW systems, a 22- and a 40-ton, and rebuilt the third fish hold, which had been set up for blast freezing. The boat can now pack 300,000 pounds of salmon in RSW. This, along with a lot of new stainless piping and other improvements has earned him contracts for packing Valdes salmon in the summer for Silver Bay Seafoods and Sitka roe herring in the spring. Recently he won a contract to pack live hatchery salmon fry out some distance from the hatchery at Hidden Falls to avoid predator whales.

In 2017 he acknowledged his maritime heritage by renaming her Nordic Lady. It was only later that he found out the family of the original namesake, Judi B, came over from Norway on the same boat as his grandfather. A good part of Westergard’s continuing success comes from learning from and acknowledging others in the industry, such as Silver Bay Seafood’s Randy Lantiegne, who have been mentors. He has even tracked down Herman Schmidt, who assisted in the design and build of the boat including the selection of the boat’s original Deutz BT16M 716W rated for 730 hp at 1,800 RPM. This big V-configured engine had 16 cylinders mounted in a 120-dergree V configuration.

Fortunately for Westergard, when he decided to change out the old engine for a new Cummins he found his way to Jamie Painter at Southeast Diesel and Electric in Ketchikan. Painter said recently, “I like working with boat crews to install a new engine as they are always anxious to learn and they will be the ones caring for the engine when it is in use.”

In a remarkable bit of engine fitting, Painter was able to modify the engine mounts to fit an in-line six-cylinder Cummins QSK19 rated for 750 hp at 1,800 RPM, to the existing engine bed. He was able to match it to the original marine gear and ratio, a Twin disc MB540 5.17:1 by removing a stub connector shaft and replacing a worn coupling with a Centra flexible coupling. The close match of horsepower meant that the same gear ratio, 5-inch shaft and 74 by 48-inch Coolridge “Atlantic” prop could also be retained.

“We knew that he had these contract jobs to do,” says Painter, “There were some long days but we got the main changed out in two weeks and then another week for the gen set.” Working alongside at the Ketchikan Boat Harbor, the repower, including the new 200-kw gen set, was completed by mid-May 2018.

This left the owner time to prep the boat for the salmon season. With, reports Jamie Painter, “A very efficient fuel burn.”
“I was concerned about the fuel” says Westergard, “This spring we put the new QSK19 in the boat and it has been awesome.”

Want to Cut Emissions? SLOW DOWN

Merchant ships traditionally operate in the open sea at or near full speed. This is hard on the engine, hard on the ship and hard on the crew.