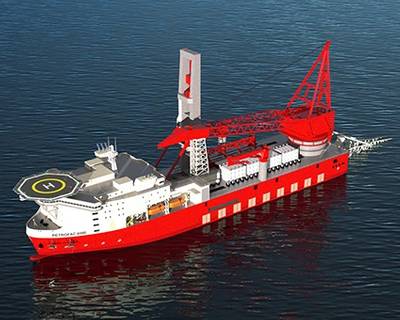 The SCR systems and engines will be constructed at MAN Diesel & Turbo’s Augsburg, Germany facility, while the vessel will be constructed by the ZPMC yard in China using a proprietary Petrofac design. MAN Diesel & Turbo and Petrofac have also entered a 12-year service contract for the management, maintenance and monitoring of the six engines. Vessel delivery is scheduled for 2016 with the vessel expected to be available for offshore construction and installation activities from early 2017.

MAN Diesel & Turbo reports that its advanced technology and after-sales experience, as well as the lower running costs for the engines and their higher power per cylinder, were important factors in winning the contract.

Selective Catalytic Reduction injects urea into exhaust gases and passes them through a catalytic converter at temperatures of 300 to 400° Celsius. The subsequent, chemical reaction reduces undesired nitrogen oxides (NOx) by over 80%. The SCR system in its entirety consists of a catalytic converter with several control units and a surveillance-and-control unit.

In September 2014, the DNV-GL classification society awarded MAN Diesel & Turbo a Tier III-compatibility certificate for its MAN 8L21/31 four-stroke engine aboard a DFDS Seaways ship with a retrofitted SCR system; the ‘Petunia Seaways’ is a cargo ship that sails a regular North Sea route. While the engine alone meets IMO Tier II emission criteria, the SCR system for NOx reduction raises the whole system to the standard demanded by IMO Tier III rules.

MAN Diesel & Turbo reports that results from the test bed and open sea have generally shown that SCR technology is reliable and ready for commercial production and operation. Accordingly, it has already made the basic version of the SCR system available for every four-stroke engine in its portfolio.