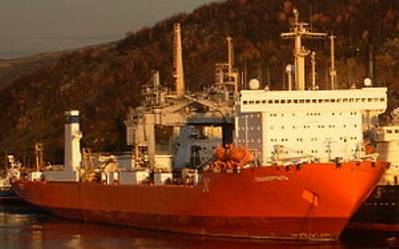 Russia has started repairs of the world’s only nuclear-powered container vessel, the 260m long, 61,000 displacement, 'Sevmorput' to be employed in both commercial and military operations in the Russian Arctic, reports Barents Observer.

The vessel, built at the Zaliv yard in Kerch, Ukraine, and commissioned in 1988, was put in dry dock in Roslyakovo outside Murmansk on December 26, 2013, and will go through extensive repairs before entering service again in 2016, reports Barents Observer, citing news from Atomflot.

Sevmorput will be conducting several tasks for the Ministry of Defense, primarily connected with Russia’s enhanced presence in the Arctic and re-opening of cold war-era airfields on the New Siberian Islands and Franz Josef Land.

Commercial tasks for the nuclear container ship, which has powerful icebreaking capabilities, will include deliveries of goods to the northern territories, as its enormous cargo capacity make it possible to transport one year’s requirements of provisions and supplies to all settlements along the northern coast of Russia on one single journey, Murmansky Vestnik informed the Barents Observer.