Nuclear-powered Icebreaker to Bow Out 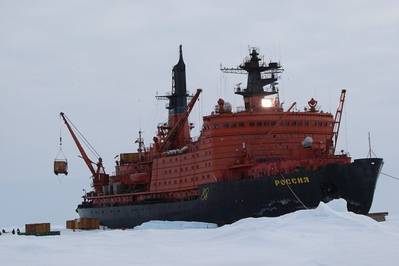 Russian icebreaker 'Rossiya' leaves Murmansk for the Gulf of Finland on probably her final voyage.

The veteran icebreaker is heading for the Gulf of Finland travelling along the coast of Norway and through the narrow Øresund between Sweden and Denmark to the Gulf of Finaland, where she will be deployed until the end of April to assist commercial shipping during the winter navigation, reports the 'Barents Observer'

Rossiya has sailed on the Northern Sea Route for nearly 30 years. It is still uncertain when she will be laid up and what will happen to the vessel afterwards. Rossiya was taken into service in 1985, as the world’s fourth nuclear-powered icebreaker. In 1990 she became the first Soviet vessel to take foreign tourists to the North Pole.

The first time a nuclear-powered icebreaker was sent to the Gulf of Finland to assist the local diesel icebreakers in keeping the waters open for traffic was in February 2011 when Extremely difficult ice conditions had 58 vessels waiting for assistance and it was decided to send in “Vaygach” from Murmansk.

In January 2012 Russia sent its largest nuclear-powered icebreaker “50 Years of Victory” to the area. to be replaced later by “Rossiya”, which continued working in the area until the end of April last year.