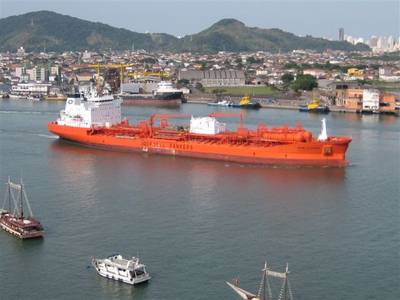 Bow Clipper is the first of Odfjell’s tankers to be upgraded (Photo: Odfjell)

Norwegian tanker shipper Odfjell announced it is upgrading the propulsion systems aboard 19 of its chemical tanker vessels in a move that aims to reduce its fuel consumption and emissions by up to 20 percent.

The upgrades, which include the retrofit of new energy efficient propeller blades and rudder-bulbs, as well as technical improvements to the ships’ main engines, turbo chargers and shaft generators, will place Odfjell’s vessels among the most energy efficient chemical tankers in the world, the shipper said.
Though initial model tests conducted at Norwegian Marine Technology Research Institute (Marintek) indicated reduced fuel consumption of about 15 percent for the 11 vessels in the shipper's 37,000 dwt Kvaerner class built in the mid 1990s, sea trials before and after the first upgrade showed an overall efficiency gain of more than 20 percent, leading Odfjell to additionally upgrade its Poland class of eight 40,000 dwt ships delivered between 1999 and 2007.
Odfjell’s Bow Clipper was the first vessel to be upgraded during its scheduled dry-docking in August, leading way for the 18 remaining vessels to be overhauled by the end of 2017.
“The full scale sea trial for our 37,000 dwt vessel concluded with a 20 percent reduction. This is even better than the model test results and is as such highly satisfactory,” said Helge Olsen, SVP Ship Management in Odfjell.
Dr. Kourosh Koushan, Research Manager at Marintek, said, “We are involved in many projects related to energy saving and the reduction of emissions. Odfjell is one of our clients showing great technological interest and willingness to apply energy saving measures to reduce emissions. In this particular project we documented an energy saving in excess of 15 percent for the Kvaerner class, which is high compared to many other vessels tested. In the second project for Odfjell we documented a saving of approximately 20 percent for the Poland class, which is exceptional.”
The concept was developed by Odfjell in cooperation with MAN Diesel & Turbo, Grenaa Motorfabrik and ABB AS Turbocharging, It includes the retrofit of highly efficient Kappel propeller blades, fairing cone and rudder bulb, shaft generator gearbox and Odfjell determined settings.
Under the improvements vessels previously rated D+ Rightship's energy rating are upgraded to an A+ rating, up to par with eco-design vessels being built today such as Odfjell four latest new builds.
“This investment in vessel efficiency demonstrates Odfjell's leadership in environmental sustainability,” said Warwick Norman, CEO of RightShip. “It is also a smart move from a business perspective positioning Odfjell advantageously in the market.”
Kristian Mørch, CEO Odfjell SE, said, “This project shows Odfjell at its finest; it is a result of a true team effort, and demonstrate the deep know-how of our organization.”
• chemical tankers • energy • Kristian M??rch
Email