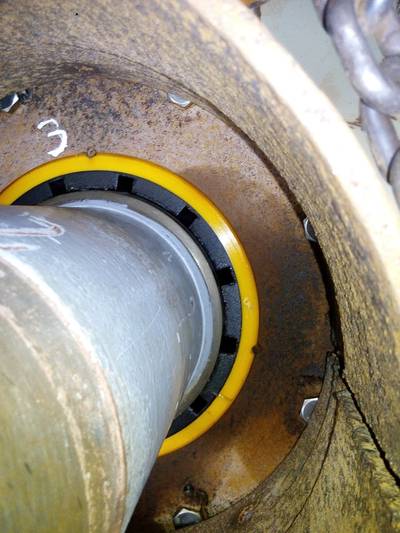 The first four of 15 Impala Terminals Colombia-operated tug/tow boats have been converted from oil to water-lubricated tailshaft bearings.

Impala Zambrano, the first of 15 triple-screw and twin-screw push boats scheduled for oil-to-water conversion, was retrofitted in July 2015 with a Thordon RiverTough bearing and TG100 shaft seal combination.
Three triple-screw and one twin-screw pusher vessels have since been converted and Thordon’s Colombian distributor Delta Marine and River Services will now work on the next vessels in the series. All 15 tug/towboats are scheduled for conversion by the end of 2017.
“Impala’s boats operate on Colombia’s highly abrasive Magdalena River but its existing oil-lubricated tailshaft bearing system was problematic: water ingress through the aft seal was resulting in the complete seizure of the tailshaft bearing. And with El Niño approaching, the operator couldn’t risk further damage to the vessel in shallow silty rivers,” said Axel Swanson, Thordon Bearings’ Business Development Manager, explaining the reason behind Impala’s decision to convert to an open water tailshaft bearing system.
The low level of water in Colombia's waterways, an effect of the drought caused by the El Niño weather phenomenon, is a major concern for Latin American owners of workboats operating on the region’s rivers.
“By far the biggest problem with the original oil-lubricated system was the small 4mm (0.157”) clearance between the propeller and Kort nozzles,” said Jorge Luis Vélez, Manager, Delta Marine and River Services. “When silt or sand lodged between them, it prevented the circulation of lubricating oil, resulting in increased friction and high bearing temperatures. Ultimately it was destroying the bronze bearing, potentially causing catastrophic damage to the shaft.”
“Since the retrofit, the RiverTough bearings and TG100 seals have been operating very successfully. The vessel has been operating in rivers with very low water levels with high sand and silt content but the Thordon Bearings’ system has proven itself. We recently checked the bearing clearance as well as the whole system and all the components are in perfect working condition,” Vélez said.
Swanson added, “We completed the Zambrano conversion just prior to the El Niño climate cycle, but the vessel was able to operate at shallow draught without detriment to the RiverTough bearings and TG100 seals. It would have been very difficult for the vessel to operate an oil-lubricated bearing system in these harsh, low draught conditions without enduring substantial bearing wear, at the very least.”
After the first conversion, Impala Terminals Colombia contracting Delta Marine and River Services for RiverTough/TG100 retrofits to a further fourteen Magdalena-operating vessels.
“This is a substantial order for Thordon Bearings, covering 38 shaft lines in all,” said Vélez. “While the ability of the Thordon system to negate vessel downtime was a key factor, so too were the reduced life-cycle costs associated with a water-lubricated tailshaft bearing arrangement. Since no aft seal is required – the component of an oil-based system most prone to failure – emergency drydocking and repair costs have been removed, as has the need for lubricating oil.”
Andy Edwards, Commercial Director, Thordon Bearings, added, “We hear operators with traditional oil-lubricated bearing systems having to replace them every two years or so due to excessive wear, which is completely unnecessary. Data from vessels operating Thordon’s RiverTough bearings show typical wear rates of 0.075mm to 0.100mm (0.003” to 0.004”) in 6000 to 7000 hours of annual use. They routinely outlast rubber bearings by a factor of two or more.”
Delta Marine has begun retrofitting RiverTough bearings and TG100 seals to the remaining vessels, each of which will require bearings and seals for shaft diameters ranging from 165mm (6.5”) 186mm (7.3").
• Colombia • rubber bearings
Email

Harvey Gulf International Marine announced Thursday it will install 10 battery systems on board eight of its vessels as the U.S.