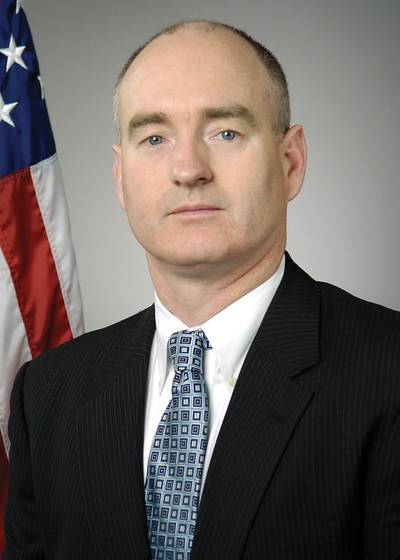 As Director of Innovation, Dr. Larry Schuette is one of three portfolio directors at the Office of Naval Research (ONR).  His counterparts are the director of research (discovery and invention) and director of transition.  The Office of Innovation promotes, fosters, and develops innovative science, technology, processes and policies that support the Department of the Navy.

“I manage the ‘leap ahead’ portfolio here at the Office of Naval Research,” he says. Schuette leads both technological innovation in as well as the business of innovation.  “Our team manages ‘quick reaction’ technology and acquisition enablers   to provide rapid and agile responses for critical warfighter needs,” Schuette says. That includes Innovative Naval Prototypes (INPs), which push the boundaries of our nation’s technical talent to deliver transformational warfighting capabilities to the U.S. Navy and Marine Corps.  [The Department of Defense (DoD) categorizes research, development, test, and evaluation (RDT&E) activities by budget authority in three categories:  6.1 is basic research; 6.2 is applied research; and 6.3 is advanced technology development.  Innovative Naval Prototypes explore high 6.2 and 6.3 technologies that can dramatically change the way naval forces fight. ]

INPs are not programs of record, but they do reduce the acquisition risk of these new and disruptive technologies and capabilities, he says.  “Some of our INP programs include the Electromagnetic Railgun (EMRG); the Free Electron Laser (FEL); Persistent Littoral Undersea Surveillance (PLUS); the Transformable Craft (T-Craft) Sea Base Enabler; and the Tactical Satellite (TACSAT) series of spacecraft.”

“The SwampWorks program is part of my portfolio,” he says.  “SwampWorks explores innovative, high-risk and disruptive technologies and concepts, and leverages short exploratory studies to examine the maturation of a proposed technology before making substantial investments.  These efforts are smaller in scope than INPs and are intended to produce results in less than three years.”

As an example, Schuette says ONR previously designed unmanned surface vessel s to be used as minesweepers, “so we can get away from using ships to tow mine countermeasures equipment in minefields.  Taking another look we’ve found that the investment we’ve made in high-temperature superconducting degaussing equipment—to protect surface ships from magnetic influence mines—also has applications for being used remotely to detonate those mines.  While high risk, the research may have significant impact.”

The Innovation portfolio also involves the Massive Multiplayer Online Wargame Leveraging the Internet —or MMOWGLI—exercise, a joint effort between ONR, Naval Postgraduate School (NPS) and Institute for the Future (IFTF).  This open online wargame uses crowdsourcing to get a wide range of ideas ideas and strategies that may provide insight to some of the Navy's toughest problems.

TechSolutions is a transformational business process that provides Sailors and Marines with a web-based tool for bringing technology needs to the Naval Research Enterprise for rapid response and delivery.

“One of the best ways to provide that quick reaction capability to warfighters is to hear about what they need and their ideas about solving problems from them directly,” Schuette says.  “Through our TechSolutions program we invite Sailors and Marines in the fleet and in the field to bring us their problems and ideas, so we can put the S&T community to work for them.  It produces tangible results.”  (See related Tech Solutions story)

We’ve developed a series of satellites that pack a lot of capability into a small size, and have allowed us to prototype new concepts quickly and get them into space.  We just launched TacSat-4, a small UHF communications relay satellite that allows a Marine on the ground to use a hand-held UHF radio with ranges previously unheard of.  This satellite packs a lot of power into as very small space, and has one of the most advanced thermal systems ever flown.  We’ve also developed a Virtual Mission Ops Center (VMOC) that allows for a lot of automation and flexibility for mission planning.  We’ve learned a lot with this satellite, and we’ve also given the warfighter a new and much-needed capability.”

The T-Craft—or Transformable Craft INP being developed by ONR is a “seabasing enabler.”  It had to be self deployable and deliver cargo from the sea base to shore “feet-dry,” which means discharge its payload up to the beach, beyond the surf and onto dry land; and then repeat the process to continue delivering very specific cargo where needed.

Several designs have been produced for ships that can self-deploy without a payload up 2,500 nautical miles unrefueled at a speed of 20-plus knots through sea state 5.; meeting up with the sea base; taking on up to 750 tons of cargo—including vehicles as large as M1A1 tanks—in high sea states; and then deliver that payload from the sea base to shore at high speed (more than 40 knots), then discharge the payload “feet dry” over the surf and onto dry land; and then repeat the process to continue delivering very specific cargo distributed where needed, all without port facilities.  The three designs show the concept is feasible.

“The T-Craft INP demonstrator won’t be built, but the technologies we’ve advanced in studying that concept will be available for naval architects and marine engineers for years to come,” Schuette says.

The Navy is investing heavily in unmanned systems in the air, on the surface and on the ground, as well as under the sea. The Large displacement unmanned underwater vehicle (LDUUV) INP will be 4-feet in diameter and 20-30 feet long, with a 70-day mission profile.  The LDUUV leverages the considerable experience with smaller UUVs, and bring those lessons learned into a larger, more capable platform,” Schuette says.  “This INP will be a complete game changer for the community.”

“There are lots of missions for a UUV with that payload, volume and duration,” Schuette says.  Schuette says the LDUUV is like a truck with a flexible payload section.  “We provide the guidance, platform, power and energy and autonomy.  Others can bring the payload.” ONR is working with universities as well as the Naval Research Laboratory, the Naval Undersea Warfare Center at Newport, RI, and the Naval Surface Warfare Center at Carderock, Md., to find new types of propulsion and fuel sources. “We’re not looking at electro-chemical energy storage.  We’ve been looking at the hydrogen fuel cell in that General Motors has developed,, and we’re are working to install it in a UUV.  Ideally, we want to stay away from batteries, and find something completely new,” Schuette said.  “We’re trying to create the alternate future.  The time is right.”

“We’ve leveraged research that goes back to the days of the Strategic Defense Initiative in electromagnetic rail guns and directed energy weapons.  We’re working with Navy labs and contractors to build prototypes and show Navy what the art of the possible is,” says Schuette.  “NRL just fired their 1,000th rail gun shot, and we’ve reached 33 mega joules with our rail gun at Dahlgren, a world record.”  “I’m excited about rail guns and free electron lasers,” Schuette says.  “We said what we were going to do, and we’re doing it.  We’ve taken this from science fiction to science fact.”

Schuette says ONR’s investments in innovation will an impact on both naval forces and the maritime industry—on and under the sea.  “We’re learning what we need to do to keep ships out of dry dock, and get that full ship life with less labor than we’re expending now,” says Schuette.  “We’re tying together a lot of discovery and invention work and investing in Future Naval Capabilities (FNCs) to show the Navy what this would look like on a ship.”

“We’ve always been challenged to get full rated life out of platforms, so how can we create a ship that needs less attention, less often, and still performs at its best?  How can we keep a ship out of dry dock and in service?   So we’re looking at the ‘maintenance free ship.’  I see the tools we use for maintenance on ships today as the same as or similar to the tools we used in 40s and 50s.  For example, we still use chipping hammers and needle guns for removing paint, and mitigating corrosion and rust.  We’re looking at new coatings and high-solids paints that don’t rust for voids and ballast tanks—one of the worst places for corrosion—that last for the life of the ship, or instead of requiring attention every three years, only need it every 15 years,” he says.

“In terms of ship design and production, maintenance, protection, and survivability, we’re trying to build things that last longer.  And we’re looking at new tools that have a high return on investment, that can do a better or more efficient job for a ship’s crew, shipyard or contractor, because that will ultimately save the Navy money and increase our availability,” he says.

Schuette says ONR is studying different materials for ship construction, such as composites and titanium.  “We’ve always thought that titanium is too expensive, but it’s stronger than steel and aluminum for its weight.  It never corrodes and never needs paint.  You can even recycle it at the end of its service life.  Besides the very expensive aviation grade where saving weight is so important, there are other types of titanium that are not nearly as costly.  So, when looking at total ownership costs, titanium might actually be the best choice.  But at this point we simply don’t have enough information to provide the ship designers.  We want to learn everything we can about building with these materials so designers can make informed decisions.”

“We’re at our best when we’re working with large groups to look at problems from different perspectives,” Schuette says.  Schuette says collaboration with the combatant commanders and the operational commands is very important.  “We work with the senior leadership in the fleet.  We’re talking with the flag officers and the science advisors on their staffs to find very clever solutions to their requirements, and then we work with the acquisition community to help get that new technology into the field much quicker.  We’re working with the Navy labs; Department of Energy labs; universities; the fleet, requirements and resource sponsors on the Chief of Naval Operations Staff, and the acquisition and test community.  When you have rich and robust teams, you make tremendous progress in ways you didn’t anticipate.” How does all this ultimately support warfighters?  Schuette says ONR must balance the research between the warfighter of today, tomorrow, and the future.  “We like to work in all three spaces.  But if it doesn’t support the warfighter, why do it?”

(As published in the November 2011 edition of Maritime Reporter & Engineering News - www.marinelink.com)