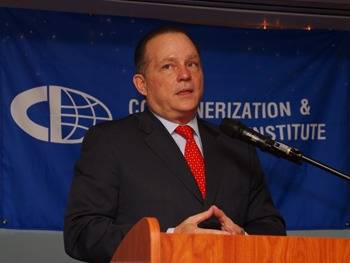 Mr. Alemán spoke as he accepted the Containerization and Intermodal Institute's 'Connie Award' at the annual luncheon at the Newark Club.

A construction engineer who assumed the helm of the PCA in 1998, Aleman has overseen the design and present $5.25 billion expansion until his retirement in September.

He noted that the present expansion "will not be the last." As the project continues, he noted, the increasing size of new vessels will mandate yet another expansion. The existing project will allow the canal to handle ships up to 13,000 TEU. More fuel-efficient ships and the increasing price of bunkers are bringing 18,000-TEU ships onto the seas "and we must have Panama Canal locks that can handle them. We must have one more expansion."

His Connie Award was presented by James Newsome, who heads the South Carolina State Ports Authority, himself, a Connie recipient in 2010. The Port of Charleston, like other harbors on the East and Gulf Coasts will benefit by the expansion of the canal. CII's President, Allen Clifford, said: "To be in charge of the cornerstone of the global transportation system, and a model of excellence, efficiency and integrity is a monumental task; to be able to present Mr. Alemán with a Connie is a monumental honor for CII."