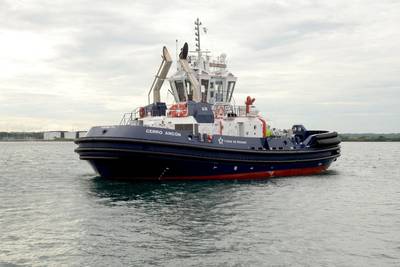 The Panama Canal has  received  Cerro Ancon, the last of the 14 tractor tugs of its new fleet. These new tugboats will allow the Canal to offer a more efficient service to the global shipping industry and strengthen the waterway's capacity for the operation of the Third Set of Locks.

The tugboats have been gradually arriving to Panama from Spain since June 2013. Astilleros Armon, S.A., a Spanish ship-building company, was awarded the contract in September 2011. The tender was opened to wide competition with the participation of 20 companies from South America, Europe and Asia.

The Panama Canal now has a fleet of 46 tugboats to face the operational demand of the current and expanded Canal. The additional capacity will allow assisting Post-Panamax vessels that will be transiting through the new locks, which will not require locomotives as used in the existing locks.

The new tugs are named after several geographical landmarks in Panama.