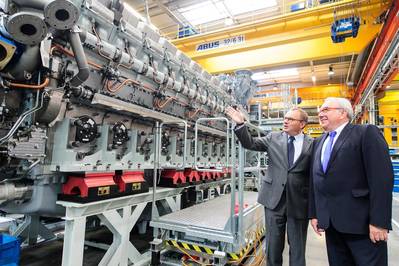 MTU's engine portfolio was presented to Under Secretary Beckmeyer in a tour of the Training Centre and Assembly Shop. Beckmeyer is the German government's coordinator for the maritime industry. Dr Ulrich Dohle said,  “In the marine sector, we are intensifying efforts on innovative, eco-friendly solutions to further minimise emission levels and reduce the consumption of energy and raw materials.” This applies to the development of a gas engine for mobile use which, compared to a diesel engine, emits 25 percent less carbon dioxide, significantly reduced levels of NOx and no sulphur oxides whatsoever. Rolls-Royce Power Systems has invested 40 million Euros in a new development test facility intended for diesel and gas engine trials. This new testing facility was officially opened at the end of July.