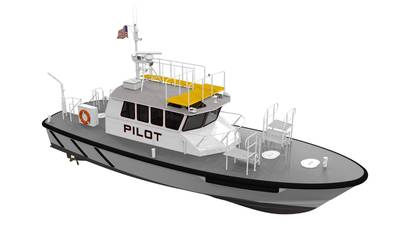 Glosten said it is working with fellow naval architecture firm Ray Hunt Design and the Canaveral Pilots Association on a pilot/demonstration project for the design, construction and operation of an electric pilot boat.

Marking a first for a pilot boat in the U.S., the vessel will feature a battery-electric propulsion system with an emergency ‘get home’ diesel engine.

During the feasibility-level engineering, the team established that a Ray Hunt hull form outfitted with a Glosten-designed battery propulsion system will achieve the speed and operating range required to support normal pilotage operations in Port Canaveral. Fla. Once in service, the electric launch will serve as one of two primary boats for supporting pilotage operations in the port.

Morgan Fanberg, President of Glosten, said, “Ray Hunt brings a wealth of knowledge on planing hulls and pilot vessels, specifically. Combining that with our own experience in electric propulsion systems, we hope to provide an excellent working solution for Canaveral Pilots.”

Glosten said specific design details remain confidential at this stage, but the minimum performance criteria established by Port Canaveral included a cruising speed of 18 knots and an operating range (on battery propulsion only) of 24 nautical miles.

While hybrid and all-electric propulsion solutions have been in use for years for a number of vessel types such as ferries, tugs and offshore supply vessels (OSV), certain design challenges have slowed the technology's inroads in the pilot boat realm.

In 2018 Canada's Robert Allan Ltd. introduced an all-electric pilot boat design for short run applications of 5 nautical miles or less. And in 2019 the Port Authority of London took delivery of the world's first hybrid pilot boat (developed by French naval architects Pantocarene and adapted by U.K. builder Goodchild Marine), but there are currently no pilot boats operating in the U.S. with hybrid or fully electric propulsion systems.

“The technology isn’t necessarily new. The challenge is managing total weight in relation to the hull form and the required operating profile,” said Winn Willard, President of Ray Hunt. “Because we are seeing a growing interest in such vessels, it made sense to partner with Glosten to work through those technical challenges.”

With feasibility-level engineering now complete, the Glosten-led team will now work to develop a draft program for the pilot/demonstration project to be used for Federal and/or State grant funding solicitations. At the current stage, a potential builder has not been not named.

Brendan McMillin, Co-chairman of Canaveral Pilots, said “[The project] presents an opportunity not only to reduce some of our maintenance and operating costs, but to demonstrate that electric propulsion can be adopted by marine pilot associations on a broader scale.”