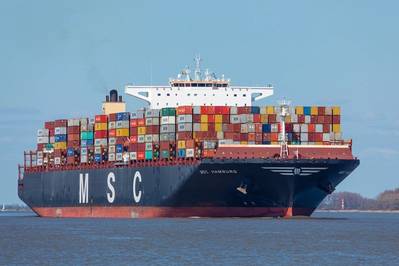 A coalition of companies including oil major Shell and no. 1 container line MSC on Tuesday launched an initiative to explore ways to cut climate-warming methane emissions from ships, which pose a major risk to industry efforts to go greener.

Scientists have warned that countries must make rapid reductions in methane, a far more potent greenhouse gas (GHG) than carbon dioxide, to stave off the worst effects of global warming.

Shipping is already grappling with ways to cut CO2 through developing fuels of the future such as ammonia and methanol.

However, a study this year by green group Transport & Environment showed LNG-powered vessels can leak significant amounts of unburned methane into the atmosphere through combustion.

The initiative's supporters, which also includes leading ship certifier LR, said in a statement there were no globally recognized methods for measuring so-called methane slip with a lack of available data, adding that defining what constituted negligible methane emissions was vital.

In its first year, members will seek to identify and pilot new technologies to monitor and reduce methane slip from vessels fueled by LNG. Once these solutions had been validated, the initiative will seek to endorse them to industry from 2023, the statement said.

Shipping group Maran Gas Maritime, among the seven partners involved, said it had "long been convinced of the advantages of LNG as a clean burning fuel".

"However, in light of the strong warming potential of methane releases to the atmosphere, keeping tight control over methane emissions is critical to ensure that LNG’s overall GHG footprint delivers as much GHG reduction as possible," Andreas Spertos, EVP-technical director with the company, said.