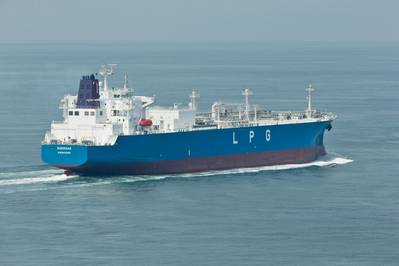 Singapore-based shipowner Petredec Holdings (Eastern) PTE Ltd announced earlier this month that it has signed a contract for the construction of up to six 93,000-cubic-meter-capacity liquefied petroleum gas (LPG) carriers with dual fuel LPG propulsion at Jiangnan Shipyard (Group) Co. Ltd. The initial firm three vessels will deliver in January, March and May 2023, and the optional vessels would be handed over within the second and third quarters of 2023.

In addition, each vessel will be powered by individual MAN B&W 6G60ME-LGIP dual-fuel engines capable of running on LPG, further enhancing the ships' green credentials.

Phillip Harwood, Petredec Fleet Director, said, “We are convinced that using LPG as bunker fuel in the MAN ES LGIP engine is the best contributor to achieving the targeted 40% reduction in CO2 emissions by 2030.”

Petredec’s relationship with Jiangnan dates back to 2007, during which they have ordered a total of 19 LPG and ethylene vessels, including this latest order and four scrubber fitted “R” Class 84,000-cubic-meter capacity vessels delivered from Jiangnan Shipyard earlier this year, making them Jiangnan’s number one builder of LPG and ethylene ships. With an existing fleet of 21 VLGCs, Petredec is already the second-largest owner of VLGCs in the world and with an average age of 3.5 years.

Giles Fearn, Petredec Group CEO, said, “We are proud to have ordered the next generation of VLGCs, which marks an important step for both us and the industry towards decarbonization by emitting 30% less CO2 than the previous generation 84,000-cubic-meter ships burning low sulphur fuel oil.”

Bjarne Foldager, Senior Vice President and Head of Two-Stroke Business at MAN Energy Solutions, said, “We are moving toward a zero-carbon future and there is a strong global push toward sustainability. As we pass the 2020 sulphur cap and approach the IMO’s 2030 and 2050 targets, companies committed to sustainability are becoming increasingly attractive.”

For MAN, the new order follows on the heels of the announcement in October 2020 by MAN PrimeServ, MAN Energy Solutions’ after-sales division, that it had successfully converted the main engine aboard the LPG carrier BW Gemini, from an MAN B&W 6G60ME-C9.2 type to an MAN B&W 6G60ME- LGIP unit. The BW Gemini is part of the fleet of Oslo-listed BW LPG.