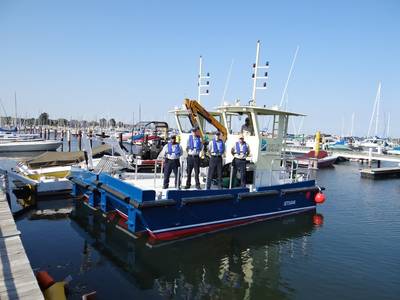 The two new vessels will remove floating debris from the Cuyahoga River and downtown Lake Erie shoreline. They are part of the Port’s broader mission to help restore the health of the river and serve as a proactive environmental steward in and around the waterways.

The Port formally commissioned the sister vessels – Flotsam and Jetsam – and their crews during a ceremony at North Coast Harbor along Cleveland’s downtown lakeshore.

“Flotsam and Jetsam will make a visible and vital impact on our waterways and community,” said Port Chair Bob Smith. “They also fit with our strategic role as a steward of two vital civic assets – our ship channel and the downtown lakeshore.”

The Port designed and built the aluminum vessels with a $425,160 grant from the U.S. Environmental Protection Agency’s Great Lakes Restoration Initiative. The Cuyahoga River Remedial Action Plan (RAP) also worked closely with the Port on the grant application.

Each boat has a different purpose, but they work in tandem. Flotsam scoops up debris with a shovel and places it in Jetsam’s large bagsters. Jetsam also has a special crane to grab larger and heavier debris such as tires and logs.

The Port designed the boats to navigate in tight places along the twisting Cuyahoga River and also to tow a 250-foot floating boom that can sweep the river of floating debris. The boats are expected to remove enough floating trash to fill dozens of dump trucks annually.

The boats will be operated by crews from the Downtown Cleveland Alliance, whose Downtown Ambassadors are well known for their work cleaning and enhancing city streets.