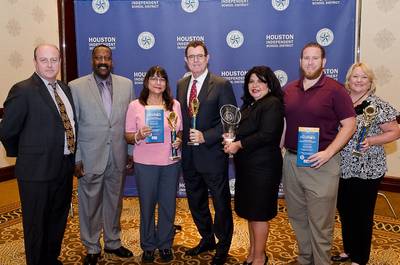 The Port of Houston Authority has been inducted into the Houston Independent School District Partnership 'Hall of Fame'.

The award is presented to community partners for the exemplary services they provide to HISD students and recognizes such initiatives as partnerships, support for district-wide programs and sponsored special events that have a multiple school or district-wide impact and serve as a model for other partnerships.

One of HISD's longest existing partners, since 1986, the Port of Houston Authority was recognized for its Port of Houston Partners in Maritime Education program, which includes the Maritime Academy, which aims to introduce area students and encourage them to pursue career opportunities in the maritime industry.

Now in its fourth year, the Maritime Academy programs at Jack Yates and Stephen F. Austin high schools serve about 600 enrolled students, who benefit from dual course credits, field trips, college scholarship opportunities and internships. The first class of students in this program will graduate this spring.

SCHOTTEL, the manufacturer of ship propulsion systems based in Spay/Rhine, is investing more in the promotion of talented…