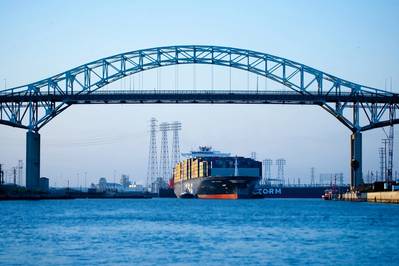 The Port of Long Beach will fund testing of a new air pollution-control technology for docked cargo ships, thanks to an agreement approved Monday by the Long Beach Board of Harbor Commissioners.

Under the pact, the Port would rely upon regional air quality authorities to oversee a demonstration project to thoroughly assess both the safety and the pollution-reducing effectiveness of a mobile, barge-mounted emissions control system to capture and treat ships’ smokestack emissions.

California recently began requiring container, refrigerated-cargo and cruise ships to plug in to “shore power” while at berth in order to reduce air pollution by using clean, landside electricity. However, the shore power regulations only apply to about 100 of the Port's 300 vessel calls a month.

The new system could provide an alternative to shore power, allowing ships to run their engines to produce the power they need for lighting, communications, pumps, refrigeration, etc. The “Alternative Maritime Emission Control System” or “AMECS,” diverts a docked ship’s emissions into an air-pollution filter-and-treatment device.

“This is an incredible breakthrough, and I’m pleased that we are supporting this demonstration project. We want to become a zero-emissions port, so I look forward with particular interest to see how the AMECS technology performs,” said Harbor Commission President Doug Drummond.

A Rancho Dominguez-based company, Advanced Cleanup Technology Inc. or ACTI, developed the AMECS technology. Under the agreement, the South Coast Air Quality Management District will supervise the testing on behalf of the Port, with Harbor Department staff oversight.

The Clean Air Action Plan approved by the Port of Long Beach and the Port of Los Angeles set a goal to find alternative technology to reduce air pollution from ships at berth, for ships not covered by the state’s shore power regulation.

The Port has been working with ACTI since 2006 on demonstrating the technology. An earlier, wharf-mounted version was often called “sock on a stack” due to the large bonnet that was lifted by crane and placed over the smokestacks to capture emissions. The new system is mounted on a barge and uses a direct connection to a vessel’s exhaust outlets.

The AMECS demonstration project is contingent upon full execution of a contract and agreement among the parties. The Port will fund the total project cost of $2,063,624. Harbor Commission approval of the project's budget was granted in July 2013.

The Port has succeeded in dramatically cutting air pollution sources since 2005. Diesel particulate pollution is down 81 percent, and sulfur oxide pollution is down 88 percent. However, the Port is committed to reducing its environmental impact further, and is pursuing a “zero-emission” or pollution-free goods-movement system.

In 2005, the Long Beach Board of Harbor Commissioners adopted the Green Port Policy, committing the Harbor Department to work with tenants, stakeholders and the community to reduce the impact of goods movement on neighbors, the environment and wildlife. In 2006, in an historic joint meeting, the Long Beach and Los Angeles boards of Harbor Commissioners approved the San Pedro Bay Ports Clean Air Action Plan ― a comprehensive strategy to limit air pollution from all port-related sources in the harbor area, and to document and share the ports’ progress toward that goal.