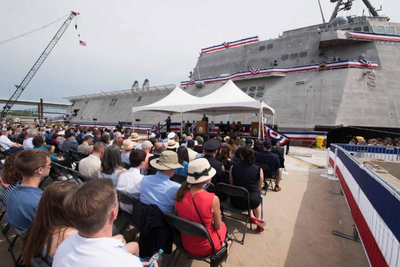 Each of the two LM2500 engines produce over 29,500 horsepower, propelling the USS Manchester to speeds of 40+ knots or 46 miles per hour. To date, GE has contracts to provide gas turbines for ships up to LCS 30 (even ship numbers are Austal Independence class ships). In addition, Austal is one of five shipyards that have been awarded a concept design contract for the U.S. Navy's new missile guided frigate FFG(X), based on the Independence class LCS.

Sister ship USS Cincinnati was recently christened in Mobile, Ala., at the Austal USA shipyard. Cincinnati is the hometown of GE Aviation and the manufacturing hub for the LM2500 marine gas turbines that power these sophisticated surface combatants.