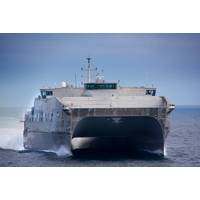 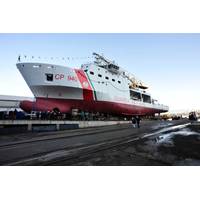 The first of two multi-purpose vessels for the Italian Coast Guard was launched at Fincantieri's Castellammare di Stabia (Naples) Shipyard. Ships of this class are designed to operate in open seas in particularly bad weather conditions and will be used for search and rescue, anti-pollution and fire-fighting missions and to control illegal immigration. They will also be able to perform complex naval missions for central command. With a length of 94 metres and 16-metre beam, they will be able to reach a top speed of about 18 knots with a range of more than 3…

The casualty is under tow towards British territorial waters & permission to enter, thence transit towards German port of Wilhelmshaven. MSC FLAMINIA and its accompanying tug boats FAIRMOUNT EXPEDITION (Fairmount Marine) and ANGLIAN SOVEREIGN (L.P. Knight) are bound for a position 40 nm south of the western-most point of the UK, Land's End. On arrival at that position a team of experts consisting of dangerous goods specialists, chemists and salvage experts will conduct a safety inspection onboard the vessel.

UK & France maritime safety authorities to send team of experts to inspect German-flagged 'MSC Flaminia' prior to English Channel transit. A fire and subsequent explosion on July 14, 2012, occurred during MSC FLAMINIA’s passage from Charleston/USA to Bremerhaven (via Antwerp and Felixstowe), one seafarer died and one is still missing. A third seafarer remains in critical condition and is being treated for burns. The crew abandoned the burning vessel and were rescued by another merchant ship. 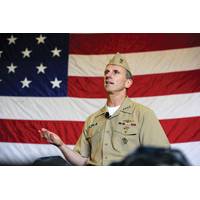 Fleet, Force put Warfighting First: U.S. At the 200th anniversary of the War of 1812, and with a new Chief of Operations at the helm, the U.S. Navy continues to provide credible combat power with persistent presence around the world. Chief of Naval Operations Adm. Jonathan Greenert has set forth his “Sailing Directions” and “Navigation Plan” for the Navy, which sets forth priorities and informs the budget and acquisition process. Meanwhile, the demand signal for the capabilities provided by the Navy and Marine Corps remains strong, and shows no signs of abating. 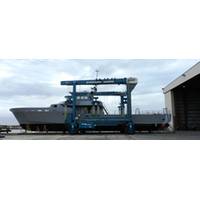 RiverHawk Launches First-of-Class Advanced Multimission Platform (AMP) at Tampa Yard. RiverHawk Fast Sea Frames (RHFSF) has launched its signature Advanced Multimission Platform (AMP) at its shipyard in Tampa, Florida. Fully designed and built in the United States, the 145-foot coastal security craft was contracted 12 months ago by the U S Department of the Navy’s Naval Sea Systems Command (NAVSEA) to Maritime Security Strategies (MSS) of Tampa, Florida. RiverHawk designed, produced and is outfitting the ship, scheduled for final delivery to NAVSEA in May.