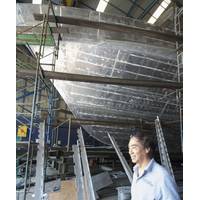 Seacrest’s Managing Director Tavipol Hemangkorn receives guest in a board room decorated with models of large crew boats, ASD tugs and a range of other vessels that his firm has built. Located just outside the mouth of the Chaophraya River at Samutprakarn, Thailand the yard’s three marine ways can launch vessels directly into the deeper waters of the Gulf of Thailand. They can accommodate vessels up to a 22-meter beam and up to 2500 metric tons. Outside the company offices an…

Ezra Holdings announces multiple contracts, worth + US$160-million, for its subsea, offshore & energy services divisions. Ezra divisions, EMAS AMC, EMAS Marine and EMAS Energy have been awarded multiple contracts for projects in the North Sea and Asia Pacific. The average tenor for all contracts is approximately 2.6 years including options. EMAS AMC has been awarded several new contracts and options worth up to US$85 million in aggregate for several projects in the North Sea and Asia. This includes a project with an oil major in the Asia Pacific region worth up to US$45-million.

Miclyn Express Offshore's Thai J/V has taken delivery of the PSV 'UM Supporter' from Poet Shipbuilding & Engineering. The vessel immediately entered into a 3 year firm contract, plus two 1 year extension options, to provide coil tubing support services to a major oil and gas company’s activities in the Gulf of Thailand. This new contract is a continuation of a long standing relationship with between the two companies in this region. The fully SPS 2008-compliant vessel has total accommodation for 50 people and 500m2 of clear deck area space.

The Thai governmen approves the purchase of two medium-sized frigates with a budget of US$1-billion. The ships are needed to beef up the capability of the Thai maritime force in patrolling the country's territorial waters in the Gulf of Thailand and Andaman Sea. The US$1-billion dollar fund, approved by Thailand's Yingluck Cabinet for the procurement of the frigates, is to be spent for a 10-year period, beginning from current fiscal year. The navy is reportedly looking for boats with an approximate 4…