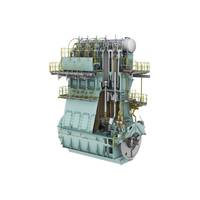 In a prepared statement China State Shipbuilding Corporation (CSSC) and Wärtsilä announced that Wärtsilä transferred its 30% shareholding in Winterthur Gas & Diesel Ltd. (WinGD), headquartered in Winterthur, Switzerland, to CSSC, one of the largest shipping conglomerates in China. WinGD will continue as an independent, international company to develop and innovate its two-stroke low-speed marine engine portfolio serving merchant markets and customers worldwide. WinGD started the development of large internal combustion engines in 1898 under the “Sulzer” name. 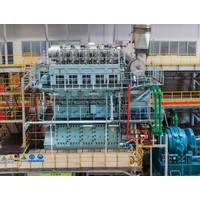 The first in a series of 'mega-class' container vessels being built for French Ship owner CMA CGM will be powered by the Wärtsilä X92, low-speed, 2-stroke engine. The vessel is to be built by Hanjin Heavy Industries & Construction (HHIC) in Subic Bay, Philippines. WinGD is the joint venture company between Wärtsilä and China State Shipbuilding Corporation (CSSC), which took over Wärtsilä's 2-stroke engine business in January 2015. The company is owned 70 per cent by CSSC and 30 per cent by Wärtsilä. 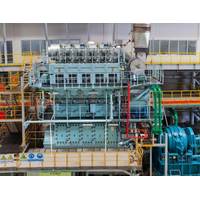 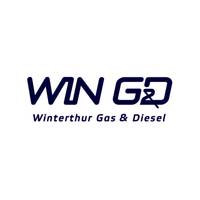 The joint venture agreement between Wärtsilä and China State Shipbuilding Corporation (CSSC) for the takeover of Wärtsilä's two-stroke engine business, which was announced in July 2014, has now been finalized. The required government and merger control approvals having been received, official closing took place on January 19, 2015. The company is owned 70% by CSSC and 30% by Wärtsilä, and is to be named Winterthur Gas & Diesel Ltd. (WinGD). The head office of WinGD remains in Winterthur, Switzerland and the company has subsidiaries in China, South Korea and Japan.

Wärtsilä reports that its first X62 two-stroke engine has successfully passed its design validation, type approval tests and necessary sea trials, and is therefore ready for full market availability. The Wärtsilä X62 is the latest in Wärtsilä's X-Generation of engines that was introduced in 2012. Thus far orders have been received for 127 X-Generation engines which feature a high stroke-to-bore ratio, thus achieving a lower engine speed and reduced brake specific fuel consumption (BSFC). 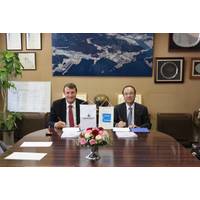 Wärtsilä Switzerland Ltd inform that it has signed a licence agreement for the manufacture and sales of Wärtsilä 2-stroke marine engines by China-based Jangsu Antai Power Machinery Co. Ltd. (JAD) which is the former large horse-power division of Wuxi Diesel Engine Plant). Under the terms of this agreement, JAD will be able to manufacture and sell the entire portfolio of Wärtsilä 2-stroke engines. Initially, JAD will focus on small and mid-sized engines up to and including the Wärtsilä X-72 bore engines.

Wärtsilä to Divest its Shares in Two-stroke JV

Wärtsilä announced that it will divest its shares in the Qingdao Qiyao Wärtsilä MHI Linshan Marine Diesel Co. Ltd. (QMD), the joint venture company established for manufacturing large low-speed marine diesel engines. Wärtsilä's shares in the joint venture will be transferred to the current majority shareholder, Qingdao Qiyao Linshan Power Development Co. Ltd., a company fully owned by China Shipbuilding Industry Corporation. The agreement was signed today in Beijing, China. Wärtsilä said the value of the transaction is not significant…

Wärtsilä inform that both its X72 and X62 two-stroke engines have recently successfully passed important tests that verify various performance criteria. The Type Approval Test (TAT) for the Wärtsilä X72 took place at the premises of Wärtsilä's licensee, Doosan Engine Co. Ltd, in Changwon, South Korea, followed by a successful Sea Trial carried out by Dalian Shipbuilding Industry Corporation (DSIC). In passing the TAT, the engine is verified as having fulfilled all classification society requirements, and is therefore fully introduced to the market. 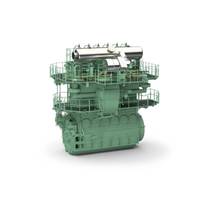 Wärtsilä inform that its new  low-pressure, 2-stroke, dual-fuel engine (DF), the 5-cylinder Wärtsilä RT-flex50DF engine, together with the gas valve unit and other relevant equipment, has been ordered for a new liquefied natural gas (LNG) carrier vessel being built for the Chinese ship owner and operator, Zhejiang Huaxiang Shipping Co.Ltd. The Qidong Fengshun Ship Heavy Industry Co., Ltd in China is building the new vessel according to the Chinese Class Society (CCS) standards.When delivered in August 2015…

Wärtsilä said that the first ever Wärtsilä X72 mid-bore, low-speed engine has successfully passed the factory acceptance test. This milestone verifies that the engine fulfils the design criteria for performance and functioning, and that it has been accepted by the customer and the Lloyd's Register of Shipping classification society. The tests were carried out at the Doosan Engine Co. Ltd factory in South Korea, where the engines are being produced under license from Wärtsilä. Wärtsilä launched its low-speed Generation X engine series in May 2011. 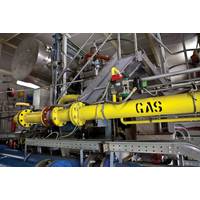 Ship Power: Out of the Past Comes Wärtsilä's Engine of the Future

Although the well-known Finnish company Wärtsilä has a very long history, it was founded in 1834, the diesel engine era begins when the company signs a license agreement with Friedrich Krupp Germania Werft AG in Germany. The first diesel engine sees the light of day in Turku in November 1942. From there on Wärtsilä passed a number of rapid expansions in all fields of products. Some of the products stayed and some disappeared. The concentration of being a full solution provider for the maritime industry started in the early 2000’s after lots of talks with potential customers worldwide. 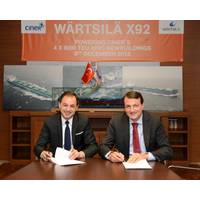 Wärtsilä say they are to supply their Wärtsilä X92 main engine for a series of four Post Panamax 9000 TEU container ships (with options for a fifth) to be built for the Ciner Group, based in Istanbul, Turkey. Each vessel will be powered by an 8-cylinder Wärtsilä X92 engine and will be built at Hanjin Heavy Industries & Construction (HHIC) shipyard's facilities in Subic Bay, the Philippines. The choice of the Wärtsilä X92 engine was based on its particularly high efficiency and environmental performance. 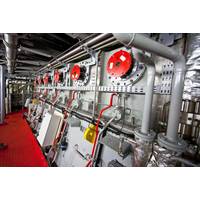 Wärtsilä successfully conducted full scale testing on gas of its low-speed two-stroke dual-fuel engine and is now introducing a full new range of engines based on its established and well-proven low pressure technology. The first engine utilizing this technology, the Wärtsilä RT-flex50DF, will be available for delivery in the third quarter of 2014. Other engines from the company's new Generation X series will follow and will be available for delivery during 2015 and 2016. The entire portfolio of Wärtsilä two-stroke engines will be available as low pressure dual-fuel (DF) versions. 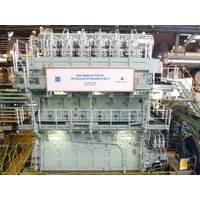 Wärtsilä announce that another of its two-stroke engines, the Wärtsilä RT-flex58T version D ER-3 , has successfully passed its Type Approval Test (TAT). This engine is a further optimised version of the Wärtsilä RT-flex58T version D engine with reduced power and greater fuel economy. The new version has been specifically redesigned to meet the operating demands of Panamax bulk carriers, and in passing the TAT milestone, the engine is verified as having fulfilled all classification society requirements. 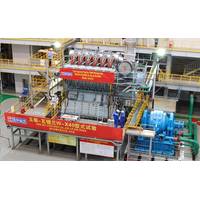 Wärtsilä announced that its Wärtsilä X40 two-stroke engine has successfully passed its Type Approval Test (TAT). The testing was carried out in Zhuhai, China, at Wärtsilä's licensee Yuchai Marine Power Co. Ltd (YCMP). In passing the TAT, the engine is verified as having fulfilled all classification society requirements, and will be fully introduced to the market following its sea trials, which are now being undertaken. A feature of the testing was meeting the SOLAS (Safety of Life at Sea) standards.

Wärtsilä, a marine industry's  solutions and services provider, is to supply its recently introduced Wärtsilä X72 licensed engines to power six new vessels for two Singapore based shipping companies. Wärtsilä equipment will be installed on four container vessels that Pacific International Lines (PIL) has ordered from Dalian Shipbuilding Industry Company (DSIC), in China, and on two bulk carriers being built by Bohai Shipbuilding Heavy Industry Co. Ltd. (BSHIC) also in China. The Wärtsilä X72 has been selected as the main engine for these ships…