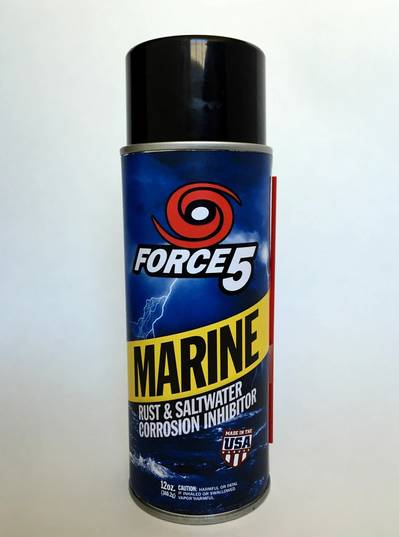 For ship and vessel owners that struggle with corrosion caused by water, humidity, condensation, salt air and environmental contaminants, Force5 Marine works as corrosion inhibiter, lubricant and cleaner to protect engines and critical equipment and keep it in good working order.
The harsh marine environment costs an estimated $50-80 billion in corrosion related damage worldwide, and can lead to the failure of critical equipment including engines, fittings, valves, switches, lighting, and electrical gear if not properly maintained.
The Force5 Marine spray protectant penetrates into metal parts to prevent rust and corrosion, while forming a bond that repels salt water and other contaminants.
The spray can also be applied liberally to wiring, switches, circuit boards, electrical gear, battery terminals as well as other electronic circuitry and connections to prevent corrosion and electrolysis.  Due to its strong dielectric properties, it can restore optimum electrical connection as well.
Force5 Marine is also a lubricant and cleaner, and can be used to remove dirt, grime, grease and even existing rust on metal parts and fasteners.
In addition to ongoing maintenance, Force5 Marine can be sprayed on engine components prior to long term storage or when winterizing.
The industrial grade corrosion inhibitor and lubricant is being used on recreational boats, U.S. Navy and Coast Guard vessels, and is currently being evaluated for use in North Carolina’s ferry system.
• condensation • dielectric • metal parts
Email