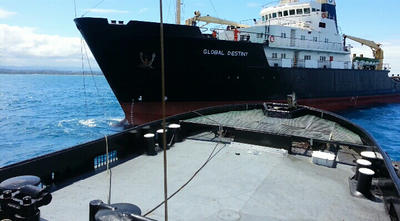 Tugs 'Triton' and 'Honcho' of the Puerto Rico Towing & Barge Co. recently assisted a drifting vessel off the coast of Puerto Rico.

The cargo ship Global Destiny, owned and operated by Diavlos Maritime based in Athen, Greece, called for assistance the morning of Saturday, March 16. The vessel reported that it had run out of fuel and was drifting approximately five miles off the coast of Dorado, approximately nine miles north west of San Juan. Puerto Rico.

Towing’s tug Triton came to the vessel’s aid and stood by the vessel until it was directed by the United States Coast Guard to proceed to the San Juan harbor anchorage.

On Monday, March 18, the disabled ship was towed by the tug Triton and tug Honcho to anchorage, where after receiving inspection and clearance by the USCG, the vessel was towed to Pier 11 for refueling.

Puerto Rico Towing’s Captain Neftali Padilla, celebrating his 15th year with the Company, was in charge of the rescue operation.

Schottel recently received an order to supply two EcoPellers and a bow thruster for installation in a chemical/oil tanker.